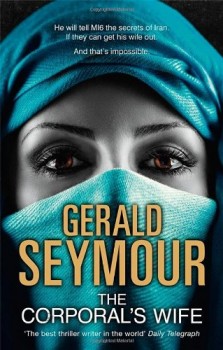 A member of an elite Iranian military regiment is blackmailed into providing intelligence to Western agencies.  He refuses to tell all he knows until his wife is rescued from Iran.

When a member of an elite Iranian military regiment is blackmailed into providing intelligence to Western agencies he refuses to tell all he knows until his wife is rescued from Iran.

The quality of the research is an area in which Gerald Seymour has always been very strong but here the knowledge of and background to the Islamic Republic of Iran are particularly extensive. He transports his readers to a country about which they are likely to know very little. Whether it is the streets of Tehran or the rugged countryside near the Turkish border, it immediately becomes real and as it becomes real it also becomes fearsome and threatening. From the prologue, in which a young opponent of the régime is executed, right up to the very end, there is the ever-present possibility of violent death for reasons a Western audience is likely to find trivial and difficult to understand.

This setting tends to make this novel rather more than a simple thriller. There are numerous instances where the author comments on the blindness and cruelty of the political/religious system. Zach, for example has abandoned his studies of Farsi and the Persian people because he can no longer bear the fraud and corruption on which the so-called government is based.

Farideh is questioned by the agents of the Ministry of Intelligence and Security and is casually beaten when she denies knowledge of her husband’s whereabouts. There are references to the ‘little bastard of the chastity squad’ and to ‘glowering malevolent clerics’. It is not only a cruel dictatorship but also an absurd one to Farideh who, during her attempted escape to Turkey, symbolically dumps her chador and immediately feels a free woman, after which there is no going back. The country is not one in which she can continue to live.

It is this background that makes the story so compelling, particularly that concerned with the attempted escape.  It is full of convincing incident and there is constant awareness that any mistake on the part of the rescuers will lead to their deaths.

The suspense is partly maintained through the portrayal of Farideh, the missing corporal’s wife trapped in a marriage with a man she loathes. Her beauty is emphasized by the number of men who instantaneously fall in love with her - the Brigadier, Zach and Kourosh, who is not so much in love with as obsessed by her.  This is reflected as well in the cover, which shows a woman with the most beautiful eyes imaginable and suggests so much more.

It is almost impossible to imagine any woman under Islamic law being unfaithful, the punishment being death, Farideh, however, is not simply any woman. She has had three affairs, including one with a young man whom she loved deeply and who was executed by the regime merely for protesting against it. Farideh knows that his execution was simply a case of murder, secretly loathes the rules governing women under Islamic law and is glad to renounce them all, whatever the personal danger. Her desire for freedom is admirable, as are the lengths to which she will go to obtain it, and the hope is that she will find a new and better world.