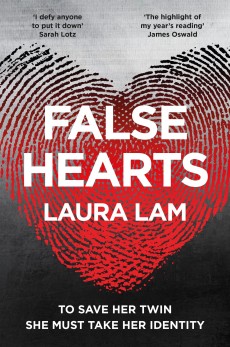 Tila and Taema are sisters who used to be conjoined twins. They moved from an isolated cult to live in San Francisco, and here they were separated and given new artificial hearts. Tila is in serious trouble and Taema agrees to go undercover to save her.

In the near future, people in San Francisco live in an almost crime-free society. Their bodies are enhanced so that no one is too thin or too fat and everyone has symmetrical features. Legal drugs are used to create feelings of well-being and on the surface everything appears calm and idyllic.

Taema and Tila tell their own stories. Having escaped from an isolated cult, the conjoined twins, who shared a defective heart, are separated and given new ‘false hearts.’ They come to terms with their individual lives and start to have secrets from each other but nothing prepares Taema for the day where Tila arrives, covered in blood, to tell her that she is running from the police who believe she has murdered a man.

The police believe that Tila has been under the influence of the Ratel, an underground, Mafia-like organisation, who control the underworld in San Francisco. They persuade Taema, who has well-developed mental powers, honed by training in her cult, to go undercover into the world of the Ratel and to try to find out what really happened and to bring them down.

The future world is very well imagined by Laura Lam. The development of the drugs, their use and the sinister power of dream manipulation are chillingly plausible. The story is told in the first person by the two sisters. Taema, who is changed to be a copy of her sister and who then infiltrates the world of corrupt power, meets the charismatic Nazarin, another agent, and then conquers her fear to protect and save her sister. Tila, who is locked in prison, is at risk of being placed in ‘stasis’ – being cryogenically frozen – as punishment for her alleged crime, and who tells the history of the twins in the cult. Between these two narrations, a clear picture emerges of corruption, love and the power of right.

The book becomes increasingly engaging. By the end I was longing to know the resolution and to rationalise the different interactions. The plot contains many interesting twists and the denouement is very satisfying.