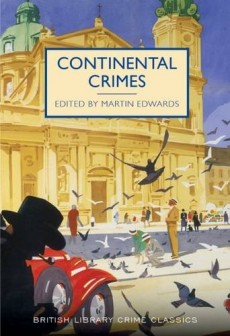 A collection of stories from the golden age of detective fiction, all set in continental Europe.

An expensive bracelet is lost in Bruges, or alternatively it might have been stolen. An archaeologist shows a rival his discovery of a new catacomb under Rome, but might be motivated by more than simply the sharing of scientific discovery. A headless corpse is discovered in the secure back garden of the Chief of Police in Paris, and it’s not known how it got there. The body of a young poet is pulled from a bay on the Italian Riviera. Did he fall from the cliffs or was he pushed? A woman travelling alone by train has her jewels stolen, and another is slowly being poisoned by her husband’s exotic mistress.

This collection of short stories contains lesser-known works from some famous authors, including Arthur Conan Doyle, Agatha Christie, GK Chesterton, Arnold Bennett and more. All are set in European countries: Belgium, France, Italy and Germany in the years surrounding World War I. Most concern British or American visitors to or residents of these countries in the days long before mass tourism.

Each author, of course, has their own style, but all reflect their era. The pace of the narrative is generally slower than we would expect now and the language is more formal, but the stories nonetheless keep the reader guessing. The attitudes of the participants seem quaint to our modern sensibilities, with the upper-class British regarding the local police as ‘Johnny foreigner’ and those same police alternately amused and annoyed by the foibles of the visitors.

This is an excellent collection of short stories for lovers of golden age detective fiction.