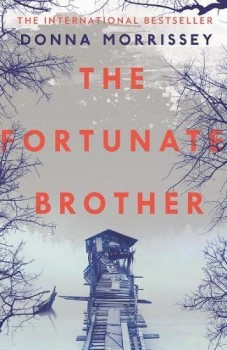 The Now family are crushed by the loss of the eldest son and thrown into confusion when a local man is killed, a man who nobody had reason to like.

This book is set in a small waterside community in rural Newfoundland, where money is tight and neighbours help each other out: the kind of place where everyone’s business is on display. The Now family are still struggling to come to terms with the death of Chris, the oldest son, some years after the event. Father Sylvanus, mother Addie and remaining son Kyle are all still mourning in various ways; daughter Sylvie is abroad although she shares their grief.

The action is seen through the eyes of Kyle, a man bruised by the death of his older brother and worried by his father’s alcoholism following Chris’s death. The revelation that his mother has an advanced cancer brings further stress. In this atmosphere, a local ne’er-do-well, Clar Gillard, is found dead in the river. Examination shows he was knifed.

Several people had reason to dislike Gillard, and the Now family are particularly suspect. The death occurred close to the Now home, and Addie was close to Gillard’s girlfriend Bonnie, who he treated badly. Sylvanus had words with Gillard the day before he was killed, and on the night of the death Gillard made an unprovoked assault on Kyle.

Uncertainty about the precise events of that night and the Now family’s reluctance to discuss their feelings create doubt between members of the family, each suspecting that another may have had a hand in the death. They, and other residents, do what they can to block the police investigation. But it is clear that many assume Kyle is guilty, and as facts pile up it looks likely that he will be charged.

Donna Morrissey creates a compelling picture of a rural society where there is plenty of friction and argument but where the harshness of the environment and economic constraints compel people to look out for their neighbours. There is plenty of hard drinking, stupidity and ugliness, but also a preparedness to work to help others, and both good and bad sides of such a life come across very clearly.

The morose atmosphere in the Now household is also convincing, and helps to set up the premise that the family members are too occupied with their own pain to discuss openly what they fear another may have done. Whether it is something readers will enjoy reading about is perhaps another question, but the murder certainly comes as a welcome nudge to shake them out of their misery.

The book will appeal to those who enjoy the working-out of family conflict, and the resolution of complex personal problems by the application of down-home philosophy, served up with a helping of local dialect. The author creates a rather bleak picture, with relief emerging only in the final pages.