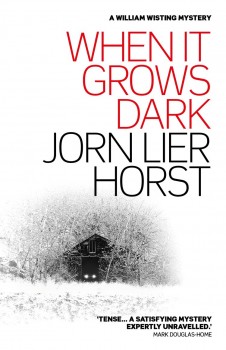 When It Grows Dark

Stavern 1983. As Christmas is approaching the young policeman and a father of baby twins William Wisting becomes engrossed in an old mystery of an abandoned classic car. He’s determined to uncover 60-year-old secrets.

Stavern, Larvik and surroundings. December 1983. The preparations for Christmas are in full swing and the young policeman William Wisting enjoys being with his family: wife Ingrid and six-month-old twins Thomas and Line. But a meeting with a friend passionate about the restoration of old vehicles throws his mind back into a pre-World War II era. Rupert Hansson has heard rumours of a rare classic car being stored under a mice-chewed tarpaulin in a dilapidated barn which seems to be locked from outside and inside. His interest piqued, Wisting agrees to find the owner and whether he’s willing to sell it.

Wisting keeps patrolling the streets at night while taking on any extra shifts, and wastes no time in learning, absorbing and analysing information from reports but as a uniform policeman isn’t allowed to be part of the investigation into the robbery he’d managed to stop.

Routine tasks are not enough. Instead he concentrates on the mystery of the abandoned car which indeed was one of the unique Minerva Saloons manufactured in the 1920s, and favoured by royalty. The vehicle was very badly damaged and neglected, including two bullet holes in the seat suggesting that the trajectory would have clearly killed the driver.

Following the paper trail, Wisting finds an old document stating that the vehicle was recorded as missing in August 1925, along with Marvin Bergan. His brother Martinius worked for the company that imported it from Belgium. That leads Wisting to discovery that a huge consignment of cash was being transported by road during the rail strike which had paralysed part of the country at the time. However, many of the potential suspects or witnesses have died or are very old and reluctant to talk.

The young policeman starts his own private investigation, first fully aware that he might be bending some procedural rules, then with the support of the Chief Inspector, and understanding Ingrid.

When It Grows Dark seems less gritty and quite gentle compared to earlier books by Lier Horst yet it is quietly powerful, in an excellent translation by Anne Bruce. It is an absorbing solid police procedural, steeped in the historical context, devoid of sensationalism and showing that the traditional graft, asking the questions, dealing with loose ends and people unwilling to communicate or hiding secrets for their own reasons can bring results.

Jørn Lier Horst has very cleverly brought Wisting’s early professional years and authenticity of the times. This approach works brilliantly, similarly to the one taken by the Icelandic author Arnaldur Indriðason whose Reykjavik Night and Oblivion added depth to the famous Inspector Erlendur Sveinsson’s personality. It’s interesting to see how the initial attitude to work shaped the young Norwegian into the respected professional.

The lengthy flashback into the original investigation happens at the time when the Chief Inspector is just about to address a new group of police officers in training, and receives a letter that might hold more clues to the 60-year-old car story. As he reflects on different times and different types of crime he realises that the motives and the human nature has not changed much. However, as seen by others he remains the same: conscious, curious and caring, and a dependable decent unsung hero. No wonder William Wisting has become one of the most loved fictional detectives in Norway.