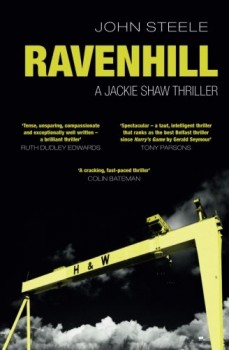 Former UDA tearaway Jackie Shaw, who disappeared during the Troubles, returns to Belfast after 20 years for his father’s funeral and finds his past coming back to haunt him.

John Steele’s explosive story of Belfast paramilitaries is a tale of noir reality – it’s cruel, shocking, tense and spectacular, and far removed and with far more impact than fictional gangsters in Glasgow, London or New York.

Half of the book is a grim history of part of the 30 years of Troubles which rent Ulster – and still do in part. While the many killings which form the background are fictional, they are all based on the long line of atrocities as the IRA, the INLA, the Ulster Volunteer Force and the Ulster Defence Association battled each other, the police and the British army in support of their factional causes.

The time-lapse story is set over more than 20 years. One-time Protestant tearaway and hardcase Jackie Shaw returns to Belfast for his alcoholic father’s funeral, but quickly finds that his past is catching up with him.

In 1993 Jackie was increasingly involved with the Belfast East Brigade of the UDA, the larger of the two so-called ‘loyalist’ paramilitaries. An appalling bombing of a video shop, in which nine civilians, including children, were killed, demanded revenge, and the UDA set out to target an IRA commander they believed responsible for ordering and planning the outrage. Jackie was designated driver of the getaway car for the Active Service Unit assigned to the killing, but ‘disappeared’ after the attempt was intercepted. A body, said to be his, was found at the scene of the police ambush. Now he has returned alive.

In the ethos of the paramilitaries, anything is acceptable, except being a ‘tout’, a police or army informant, or even worse, an undercover police or intelligence man. The punishment for either is brutal torture and a bullet in the back of the head.

Years on, the Good Friday Agreement has changed things. The paramilitaries have lost their purpose. Some, like Jackie’s former commander, now Brigadier of the East Belfast Brigade, cling to the old beliefs and finance their lifestyles by the same protection money they once levied on their communities. Others, like his former deputy and psychopathic hit man, have become full-time gangsters, running drugs, prostitution, people trafficking from Eastern Europe and every other form of crime and even co-operating with their former IRA enemies.

But if you want to know the truth of the fear and terror which gripped Belfast during the Troubles, if you want to know the warmth and compassion of the city’s proud and irreverent people, read this thrilling and exceptionally well written and fast-paced book. Belfast boy Steele, who quit the city in 1995, has captured it all in this intelligent, taut and unsparing story. There hasn’t been anything like it since Gerald Seymour’s brilliant Harry’s Game and it fully deserves any recognition it gets.