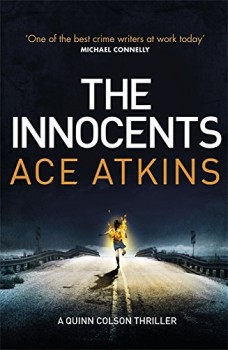 Quinn Colson’s period as sheriff of Tibbehah County, Mississippi, was not universally appreciated, and he took off for a six-month stint in Afghanistan as a contractor for the US government, training locals. Back home in Jericho he hopes to get his life sorted, in particular his relationship with Anna Lee. But when 17-year-old Milly Jones is found set alight, Sheriff Lillie Virgil co-opts Quinn as a temporary deputy to help with the investigation.

Milly, daughter of ne’er-do-well Wash Jones, had been working at Vienna’s, pole and lap-dancing to raise enough cash to leave Jericho behind. When she was killed she owed the owner of Vienna’s, Fannie Hathcock, part of her earnings, and one possibility is that Fannie’s enforcer bikers got rather over-enthusiastic. Another candidate for her murder is Nito, a local waster who was persistent in the face of Milly’s rejection.

The sensational nature of the death generates a media frenzy, and Lillie’s short fuse exposes her to criticism when no culprit is immediately found. Wash becomes a media darling despite the fact that he threw his daughter out of the house a few days before her demise. Milly was haunted by the suicide of her brother Brandon and has his phone and diaries, which suggest he was being abused. It is not until later that these items come into Quinn’s hands, when they help to crack the case.

Those who have followed the series so far will recognise the established cast. Local villain Johnny Stagg remains in jail; Hathcock has taken over his sleazy bar and is a great character, the madam with a very tough exterior. Quinn’s father Jason is still hanging around and trying to fix up a deal with some shady moneymen. Lillie is her gruff self, and Boom the disabled vet and mechanic is available when needed.

Outside the central coterie the county remains inhabited by the most appalling collection of rednecks: ‘Folks not having respect for the land or themselves.’ The author does, however, paint a sympathetic picture of those who strive for something better, and the constraints imposed by the local culture are made very clear. It has its funny side too: consider Pap’s Place – ‘a restaurant that celebrated Elvis, fried catfish and Jesus in somewhat equal portions.’

Atkins shows no signs of running out of steam; in fact I think this latest episode reads more smoothly than ever. The narrative jumps between the different participants in the story in what is now almost standard for crime drama, but it is done very well. And the stage is cleared at the end for Quinn to resume his place as sheriff, surely the most deserved and appropriate station for him.