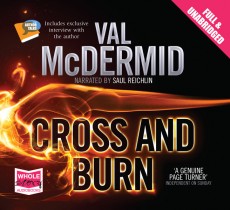 It looks like it's all over for Carol Jordan and Tony Hill – until a serial killer with a taste for blonde women strikes close to home.

So you thought DCI Carol Jordan and shrink Tony Hill were joined at the hip? Wrong. As Cross and Burn opens, they're estranged. He's moping around on his houseboat, whilst she's drinking too much and focusing her energies on demolishing the inside of her murdered brother and sister-in-law's remote house. Carol has left the police and blames Tony for the death of her family members last time out. And if you thought Val McDermid had put them through the wringer often enough, there's worse to come.

Cross and Burn gives a front seat to tenacious Paula McIntyre, who has a new boss to report to – the ambitious DCI Alex Fielding. Carol's crack squad has been spread to the four winds, and Paula soon discovers that the methods she picked up there aren't popular elsewhere.

Paula is soon embroiled in a case far too close to home – the disappearance of a friend of her partner Eleanor's. When other women disappear and are later found murdered, it's clear a serial killer is at work. And all the murder victims bear a resemblance to Carol Jordan.

As you'd expect with a consummate storyteller like McDermid, the plotting is tight and the narrative perfectly paced. If you're keen to solve the crime ahead of the cops, she drops in a few judicious clues. And McDermid juggles a number of threads: Carol's frustrations at being out of the police; Tony finally wondering whether the two of them wouldn't be better off apart; the killer and his horribly graphic violence; Paula's struggle in a new team – and an unexpected addition to hers and Eleanor's family.

Cross and Burn is another dark and compelling addition to a series that has rarely flagged. You may end up reading some of it through your fingers, but then it wouldn't be a McDermid book if you didn't! I had the audio version and found myself lalalalalalaing at several points.

The audiobook comes with extra short story – a sparky offering of a former con trying to go straight – plus an interview with the author. Saul Reichlin is one of Whole Story Audibook's most experienced narrators, and paces a book well. He's also clear and authoritative. I do, though, find him an acquired taste – he's South African and his attempts at UK accents are always well wide of the mark. And his attempts to represent the female characters sound like he's had his jaw wired together!