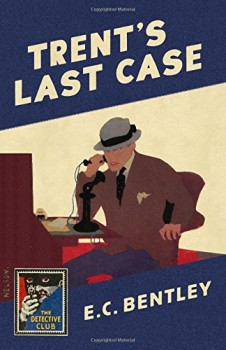 This murder mystery makes interesting reading not just because of the clever plotting – it is said that it was written as a result of a bet between GK Chesterton and the author, and that EC Bentley was trying to deconstruct the myth of the clever, logical, focussed detective to create a sort of anti-Holmes. At the time of first publication in 1913, Trent’s Last Case was feted as one of the most influential detective novels ever. It is not a book for the lover of short sentences. Any fans of Dorothy L Sayers or John Buchan will feel right at home!

Sigsbee Manderson had been given the epithet ‘Colossus’ in his home country, the US - he was a ruthless financier of unfailingly good judgement, and his death caused four days of chaos on Wall Street. Meanwhile, Sir James Molloy, the managing director of a London-based newspaper group, persuades Philip Trent to go to Marlstone, in the West Country, to investigate and report on the murder. Trent is a successful artist and man-about-town, with a reputation as a detective who can out-think Scotland Yard, having solved several murders in the past.

When Trent arrives at his hotel in Marlstone, he is pleased to meet Nathaniel Cupples, who is an old friend and turns out to be the uncle of the victim’s wife. Cupples is thus interested in the case, and furnishes Trent with details of the Manderson household: Mrs Mabel Manderson, considerably younger than her husband, and clearly not happy in her marriage, and two secretaries, plus domestic staff. American Mr Bunner had assisted Manderson with business matters and British Mr Marlowe had been the secretary with a social brief.

When Trent arrives at White Gables, the Manderson’s home, Inspector Murch of Scotland Yard is already there. The two men have a mutual respect for each other, though they work in different ways, and notice different clues.

Trent sets about his investigations – and for him, the fact that Sig Manderson had gone out into the garden of White Gables without his false teeth is a key point. Questions are asked as to why a man of such personal pride would do this.

There are a number of twists before the end. Throw in an understated love story and the result is a very satisfying and enjoyable read.

As a footnote, the author, Edmund Clerihew Bentley, was the inventor of the eponymous four-lined witty poems. These are worth a look if you have never come across them.