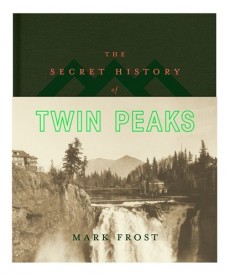 The Secret History of Twin Peaks

The co-creator of the landmark TV series Twin Peaks brings more information and mystery from the iconic fictional town.

When Mark Frost and David Lynch created the iconic series Twin Peaks, crossing genres of drama, horror and mystery, which premiered in April 1990 on the ABC network, the fictional town in the state of Washington became very real for eager, transfixed audiences across the world. I remember the tension, the mysteries, the discussions with friends … Since then the FBI agent Dale Cooper has achieved a proper cult status, but hasn’t got any closer to answering the most important question: ‘Who killed Laura Palmer?’

The Secret History of Twin Peaks was conceived, 25 years later, as a link to the original show, filling some gaps in knowledge and adding further issues. It will appeal to hard-core fans of the cult series whose expectations the author wanted to meet, just like in the follow-up movie Twin Peaks: Fire Walk with Me which was to shed light on the secrets, and the new 2017 season.

The history surrounding Twin Peaks is also the history shaping the US, with all that makes it so interesting, baffling or influential, with some conspiracy theories thrown in for good measure, UFO sightings, alien abductions, and other supernatural elements. Mark Frost goes back in time, not as far as the pre-potatoes times, but to the 1800s when Lewis and Clark came to the area and met the Native American tribe living there, then through the development of place, adding backstories of the town’s residents, snippets relating to the local business and social set-up. The mythology and allure seem to rub off on anyone who visits the atmospheric town in the mountains.

Laura Palmer’s case is now closed, and a file was found at a fairly recent murder scene. The main story is told from different points, creating complex yet sometimes tricky narrative. The central perspective comes from the mysterious archivist whose voice presides over the file delivered to the FBI Special Agent TP, assigned by Gordon Cole in the initial letter, whose job is to untangle to mystery, and cast a fresh look on the assorted information.

It’s a visually stunning book, presented in an unusual way, like a scrapbook of old letters, some of them dog-eared, entries typed on the typewriter, documents of various quality, photos, newspaper clippings and police reports. There’s even a menu from a diner. All this material makes it feel authentic. The untraditional form invites the reader to scribble more notes on the pages, though I don’t think anybody would want to spoil the beauty of the book. Yet, at the same time the volume of documents screams out for being torn out and spread out on a massive table or pinned to a board, like we see in all crime fiction dramas, so then everything, literally everything, is in plain view.

As an object The Secret History is captivating. As a comprehensive story it’s less so. It requires patience and concentration to keep the continuity of narration emerging from a puzzle.