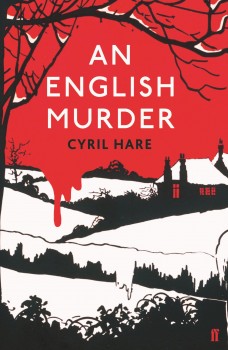 In the cut-off ancestral home of Warbeck Hall, the dying Lord assembles his closest relatives for what will be their last Christmas together. One is murdered and it falls to another guest to find out why.

When the distinguished Judge Alfred Alexander Gordon Clark died in 1958, days before his 58th birthday, classic English crime writing lost an author with the potential to be one of the greatest of its fading golden era. Under his pen name of Cyril Hare, Clark, a member of the Inner Temple, called to the Bar in 1924 and who joined the chambers of Roland Oliver which handled many of the great 1920s crime cases, used his vast legal experience to become a master of the whodunit, producing more than 20 novels marked by professional insight, gentle wit and surprising compassion.

His longest-lived character was the plodding, moustachioed Detective Inspector Mallett of Scotland Yard, a ‘beefy man with a nimble brain’ with a grave reluctance to delay the most important appointment of the day – his lunch! Hare’s work has been praised by many, including Elizabeth Bowen and PD James and this second reprint of a 1951 original, a classic and cosy tale of intrigue, lies, mystery and murder shows exactly why.

It’s full of gentle humour, some outright satire and with some pointed social comment plus an ingenious plot is the epitome of the English manor house mystery.  If you have read Christie’s And Then There Were None or Farjeon’s Thirteen Guests you’ll recognise the basic set-up and ending.

The Warbecks, one of England’s oldest families, meet for Christmas, possibly for the last time, at Warbeck Hall. The old Lord is dying, there’s no money for the savage death duties of the period, so the ancestral home will have to be sold. The disparate gathering, none of whom finds any of the others at all congenial, includes the eldest son and heir, head of the neo-fascist League of  Liberty and Justice; his cousin, the socialist Chancellor of the Exchequer; his dead wife’s young niece, who had once hoped to be his daughter-in-law; and his wife’s best friend, now married to the chancellor’s ambitious younger colleague.

Also present in the isolated house, cut off by heavy snow and fog and with all outside communication disrupted, are an impeccable, unmistakeably English butler and a Special Branch sergeant, the Chancellor’s protection officer, who becomes the investigating officer when the inevitable murder takes place.

What makes the story outstanding is the identity and treatment of the other guest. Dr Wenceslaus Bottwink is a ‘Mittel European’ Jewish historian researching the family past. A survivor of the Holocaust, Bottwink  – an almost Poirot-like character – finds he understands the English better than they do themselves and eventually unveils the killer’s identity through a historical peculiarity that could only be English!

Hare’s characters, aristocratic, middle or working class, are all perfect for what was a period of overwhelming social change. The clues are subtle and his writing style and use of language a clever blend of cosy and procedural. But it is Bottwink who shows the author at his best, portrayed with a sympathy that made Clark such a loss to his profession.

To find a non-stereotypical, well-rounded minority protagonist, allied to some incisive social commentary, vivid descriptions and nuanced interactions between characters, makes this a book modern readers should not miss.