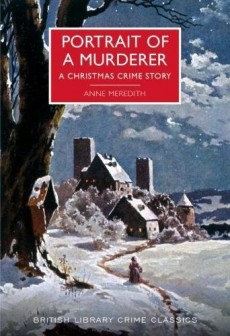 Portrait of a Murderer

Adrian Gray was an unpleasant man, greedy, capricious, bullying. Each of his six children had reason to want him dead. During their annual Christmas visit to his lonely manor house, one of them acts.

The British Library has made what could be considered an odd choice for this special hardback edition to celebrate the 50th book in its Crime Classic series – as well as this year’s festive issue. As well as the usual informative introduction from series editor Martin Edwards, it also contains his short essay on the history of Christmas-related crime fiction.

But the chilling story itself is a fascinating, compelling, morally ambiguous, psychological study of a killer, plus a little professional and amateur detection, and a great critique of 1930s society, some intentional, some perhaps more inadvertent.

When it appeared in 1933, Dorothy L. Sayers called it: “Powerful and impressive ... there is a fine inevitability in the plot structure which gives it true tragic quality.” Anne Meredith was the pseudonym of Lucy Beatrice Malleson, best known for the Arthur Crook detective series published under the name of Anthony Gilbert. Although she was a well thought-of member of the elite Detection Club, the Meredith books have long been out of print.

The Gray family were once landowners, but the old gentry are fading and they have had to sell most of their land. Meredith strongly suggests a matching moral decay. Each Christmas, the eminently dislikeable, miserly, patriarch Adrian Gray invites his six children, together with their spouses, to stay at his lonely manor house. None are fond of him. Several have cause to wish him dead. The family gathers on Christmas Eve – and by the following morning, their wish has been granted!

The children are little better than their father and most are there solely because they. are trying to get money out of the miserly old man. Richard, the eldest, is a politician, obsessed by ennoblement, who has over-extended by his extravagance in putting on a show of wealth to impress those who can grant his wish. Eustace, married to Gray’s daughter Olivia, is a dodgy Jewish pedlar of get-rich-quick schemes – portrayed with all the anti-Semitism of the age and class, both open and implied – whose business is about to fall apart.

Hildebrand, a wayward artist who has failed to translate his talent into recognition and is working as a low-paid clerk, wants money so he can return to Paris to revive his career. Daughter Amy has never left home and runs her father’s house on a meagre allowance. Isobel is home after a failed marriage – and a shadow of her former self. Only Ruth, happily married to a lawyer equally happy with what they have, wants nothing from the old man.

As Christmas Eve turns to Christmas Day, one of these will murder Adrian. The killer is revealed quite early on and this inverted mystery then rests on whether and how the murderer will be caught, as well as a penetrating psychological study of the killer and the others in the house.

Meredith takes the reader inside the killer’s head to offer a philosophy of life that puts little value on anything except the achievement of desires – for which the death of Gray and the willingness to sacrifice another family member to the hangman is a small price to pay. None of Meredith’s characters are shown in an exactly shining light. But that doesn’t make the story any less absorbing after a fairly slow start.

There’s no great suspense. Neither is there any excess padding or reliance on dramatic twists. Instead, Meredith offers some excellent writing – and a believable study of a mind that has a compelling, if horrifying, logic of its own. The sheer unpleasantness of both victim and the person the murderer sets up for the crime comes close to offering a choice as to whether the killer is actually worse in moral terms.

It is difficult to say readers will ‘enjoy’ this chilling, if compelling concept – cleverly carried through and undoubtedly well written, but if you’re a fan of the psychological noir genre, this is well worth the read.