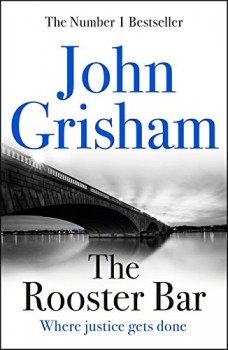 Law students Mark, Todd and Zola are struggling under a mountain of debt. Realising they have been scammed, they start looking for payback.

In The Rooster Bar, where Todd earns spending money by serving drinks, fellow law students Mark and Zola join him to bemoan the debt they have accumulated and their dismal prospects even if they qualify as lawyers. Zola’s boyfriend Gordy has done some research, and it looks like they have been suckered into investing some $300,000 each for a degree from a college which has a rock-bottom reputation.

The Foggy Bottom school is in fact one of a chain of dubious institutions run by a shady character by the name of Rackley, whose legal firms with employees drawn from his colleges act as advertisements. Rackley also runs banks that administer government loans for students, and play hardball when it comes to repayment.

The friends see no way out of the trap they have fallen into: at best they will find only low-paying work and never be clear of debt. Their solution is to pass themselves off as qualified lawyers using forged IDs, trusting that they have learned enough to make a living around the courts. This works surprisingly well for a time, despite the suspicions of some of the lawyers they meet, before a miss-step threatens disaster.

Their one chance of a way out is generated by Rackley himself, who in his greed has been manipulating bank customers to generate unjustified fees. Lawyers around the country are assembling lists of the defrauded for class-action suits. The friends find a way to put pressure on Rackley to settle quickly, and submit their own list in the name of a bogus legal firm. Their hope is that they can get paid and disappear before their many legal infringements catch up with them.

Grisham as usual has found some interesting aspects of the law to entertain his readers, albeit that the plot seems a less than wholly integrated combination of its parts. His characters find it easy to fit in with the bottom-feeders who populate the criminal courts and hospital waiting rooms, and the way business is generated through this route sounds all too realistic.

Just how much the plight of the students is reflected in real life is unclear. The size of the student loans dwarf that likely to be accumulated in UK, and without government restrictions on obligations to repay as there are in the UK it is easy to imagine graduates ending up in difficulty. But the system envisioned in the book doesn’t sound like it would have a great deal of commercial viability, and one thing you could rely upon is action from the affected lawyers if they saw government funds being used as part of a scam.

Overall, I found this a little less convincing than Grisham’s recent offerings, although engrossing nonetheless. Things get exciting towards the end, and I particularly enjoyed the series of emails by the protagonists to demand repayment of their loans: juvenile but great fun.