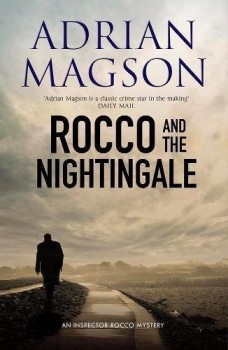 Rocco and the Nightingale

Inspector Lucas Rocco has to investigate a murder on his patch, as well as provide protection for someone the Interior Ministry wants kept alive.

Inspector Lucas Rocco is a tough Paris cop used to dealing with drug gangs in the city, but as part of nationwide initiative to broaden policing initiatives, he finds himself shipped out to rural Picardie, to Poissons-les-Marais, which turns out not to be quite the sleepy backwater that Rocco had imagined, as his last four outings have proved.

For a while, I thought I’d seen the last of the tall, formidable Rocco with Death at the Clos du Lac, published as long ago as 2013, but the Dome Press came up trumps and offered Rocco a new home, much to my delight. The series was good from the outset and matured as well as a good French cheese of the sort Rocco’s neighbour, Mme Denis no doubt presents him with when she’s doing her best to pump him for information.

When a body is found by a farmer in a water-logged ditch, Rocco is called to investigate, and wonders what a low-level Paris criminal has been doing to end up stabbed to death on his patch. Rocco prepares to investigate further, but much to his annoyance, he’s pulled away to run a protection detail for a Gabonese government minister fleeing from a coup. The Interior Ministry think the job can be done on a shoestring but that soon proves to be dangerously unrealistic.

Matters are complicated further when Rocco receives intelligence that he is being targeted by a top-class assassin working for a gang boss who holds Rocco responsible for his brother’s death. So, just another working day in 1960s Picardie!

Magson’s series positively oozes with the miasma of the damp, dark marshes that characterise Rocco’s patch. The sense of place is excellent, and the book wears its time lightly. There are no heavy-handed references to when the books are set, but the absence of mobile phones and other aspects of 21st century life sets them apart from the common herd and teams well with the brooding flatlands that are home to Rocco’s investigations.

There are plenty of surprises, a rich leavening of dark humour, and bags of engaging characterisation. Magson stays well away from playing to any stereotypes – he provides plenty of very real people, from the old farmer milking drinks from Rocco for information for all he’s worth, to the highly unusual bodyguard also doing his best to keep his principal alive. I particularly like Marc Casparon, a man used to operating in the dark shadows of the seedier parts of Paris, and Claude Lamotte, the cynical, astute rural policemen who knows more than anyone about what goes on in the area.

The book springs from a deep knowledge of French life and that’s very much in evidence on every page. If you haven’t encountered Rocco before, don’t let that hold you back. Rocco and the Nightingale works perfectly well as a standalone and provides a perfect introduction to Poissons-Les-Marais and those tasked with policing the area.