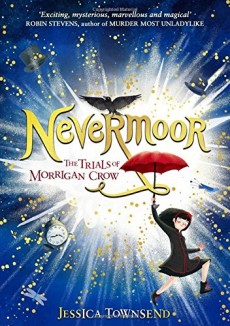 Nevermoor: The Trials of Morrigan Crow

Morrigan Crow has been on the Cursed Children’s register from birth and is fated to die at midnight on her 11th birthday. But she is given a second chance by the enigmatic Jupiter North.

Morrigan Crow spends a lot of her time writing letters of apology. It’s one of the tasks that goes hand in hand with being a Cursed Child, fated to die at midnight on her 11th birthday.

Morrigan’s family largely ignore her. Her father Corvus Crow is a well-respected politician who has to shell out large sums in compensation to those who claim his daughter has somehow blighted their lives. Broken hips to spoiled marmalade are all laid at Morrigan’s door. Her family even seem to have forgotten her impending death, and have already lined up a replacement, as her stepmother has just announced she’s having a baby.

One of the last things Morrigan wants to do is attend Bid Day, even though she won’t live long enough to see out an apprenticeship, and no one would want to make a bid on a Cursed Child anyway. But to everyone’s surprising, including Morrigan’s, she receives not one bid but several. As her birthday looms ever closer, Morrigan is faced with a terrifying choice: be caught by the mysterious and terrifying Hunt of Smoke and Shadows, or throw her lot in with the enigmatic Captain Jupiter North, who offers to whisk her away to somewhere safe. Morrigan chooses to live, and soon finds herself in another land, the magical Nevermoor.

Jessica Townsend builds her world out of an intoxicating mix of the mundane and the magical. Instead of electricity, things are powered by Wunder, there’s Christmas but no overt mention of religion, and there’s a version of the tube system where you hitch a ride on a fast-moving rail using an umbrella and jump off when you reach your destination.

The only problem for Morrigan is that she’s in Nevermoor illegally, and the only thing standing between her and being deported is that she has been entered into the trials for membership of the Wundrous Society, with Jupiter North as her patron. If she succeeds, Morrigan will have made friends for life and gained the things she’s always craved the most – family and a sense of belonging. But if she fails, she faces a return to her home city of Jackalfax, where the Hunt of Smoke and Shadows will be waiting for her.

Nevermoor is a thoroughly engaging and joyous romp through a landscape that’s both familiar and deeply strange at the same time. Jessica Townsend has a light tough with world-building and there are no dreaded info dumps, just subtle reminders of how Morrigan’s world differs from our own. She sleeps in a bedroom that constantly re-shapes itself overnight and talks to a vampire dwarf in a very strange, sprawling hotel with a large, talking cat as a housekeeper.

Townsend’s book is bound to attract comparisons with Harry Potter, but Nevermoor can easily stand on its own two feet. Jupiter North, with his flaming ginger hair and eccentric manner, reminded me somewhat of Matt Smith’s energetic portrayal of Doctor Who, but I found North considerably more entertaining and less annoying, and also more ginger, something the Doctor can only aspire to.

Morrigan is a delightful character and her wry mental observations on the world around her provide a vein of humour in a story that I enjoyed from start to breath-taking finish. This is a magical, energetic and perceptive teen romp that veers in a heartbeat from light to dark and back again.