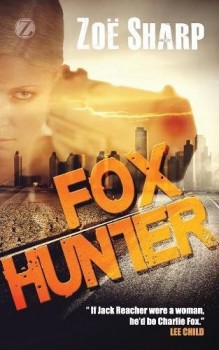 Charlie Fox is on the trail of her former lover and ex-boss Sean Meyer who appears to have gone on a murderous rampage, targeting the men who brought Charlie’s army career to a brutal end.

The phrase ‘strong female character(s)’ crops up a lot in reviews of crime and thriller titles and this is still seen as sufficiently uncommon as to be worth commenting on when an author gets it right. And sadly, there are too many times when authors don’t. But there’s no danger of Zoe Sharp falling short. Her main character, Charlie Fox, can out-fight, out-shoot and generally run rings around any man unfortunate enough to get in her way. There’s only one man that she can’t guarantee taking out in a fight and that’s her former lover and ex-boss, Sean Meyer.

Charlie and Sean, both ex-military, have been working in America in the close personal protection business with Parker Armstong’s agency in New York. But Sean is missing, and Parker has good reason to believe that he’s embarked on a murderous campaign against three of the four men responsible for ending Charlie’s army career. The only reason he’s not gunning for the fourth is that he’s already dead. Parker is more worried about the damage this might do to the agency’s reputation than he is about his business partner and he instructs Charlie to find Sean and stop him – by any means necessary.

The hunt for Sean takes Charlie into the badlands of Iraq, still dangerously unstable and hostile. To make matters worse, Charlie is still injured from a previous mission and it soon becomes clear that Sean doesn’t want to be found and that there are others who want her out of action and out of the Middle East, leaving in a box, if necessary. Charlie doesn’t take too kindly to being told what to do and, working with personal protection specialist Luisa Dawson, is determined to pick up what little trail Sean has left behind and find out if he really has gone rogue or whether there is something else behind the torture and murder of Michael Clay, one of the four men who raped Charlie when she was undergoing training having passed Special Forces Selection.

An outing with the redoubtable Charlie is always a hair-raising ride and Fox Hunter is no exception, but what sets this book aside from the others is that here Charlie’s backstory, which has shaped much of what we learn of her character, is very much to the forefront as she has to confront not only her internal demons but also the men who were responsible for stripping her of the life she might have had if she’d been able to complete her training. This look behind the veil that Charlie has always drawn over the attack on her is both raw and painful and at times uncomfortable, and that’s only as it should be, given the circumstances of the attack on Charlie and its aftermath.

The relationships between the characters are as intriguing as the action scenes are realistic. Charlie still has feelings for Sean, but following a catastrophic head injury, Sean is a very different man, and appears to find it hard to control the violent instincts that have served him so well in the past. Parker Armstrong would like to be in a relationship with Charlie, but she doesn’t want any additional complications in her life.

Fox Hunter is a consummate thriller, with believable action and finely-honed dialogue. Zoe Sharp’s characters immediately come alive, from young Moe, the bright, ever-cheerful guide who does his best to take Charlie where she wants to go, to Najida, a Muslim woman who was cast out and nearly killed by her own family for bringing disgrace on them by being the victim of a vicious rape. Sharp pulls no punches when telling Najida’s story and propels the horrors caused by such uncompromising fundamentalist beliefs firmly into the spotlight.

There are wheels within wheels when it comes to the satisfyingly twisty plot, and the book builds to a tense climax in a castle deep in the freezing forests of Bulgaria. Zoe Sharp’s action scenes remind me of the incomparable and ever-inventive Peter O’Donnell and his two protagonists, Modesty Blaise and Willie Garvin. Charlie and Modesty have a lot in common, and that’s probably the highest praise I can bestow on any character!