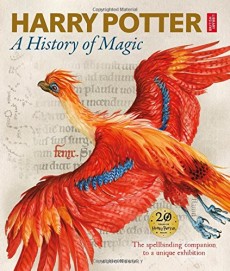 Harry Potter: A History of Magic

by The British Library

The companion volume to the British Library exhibition which marks the 20th anniversary of the publication of the first of the Harry Potter books.

2017 marks the 20th anniversary of the publication of Harry Potter and the Philosopher’s Stone and to celebrate this, the British Library and Bloomsbury Publishing have come together to produce a major exhibition and an accompanying book entitled Harry Potter: A History of Magic.

The story that so many people around the world now know so well starts with Harry Potter on the brink of his 11th birthday, about to step into a new world, one that contains great wonder and beauty, but also immense danger and ever-present dark shadows that wreathe Harry’s journey through seven books. The exhibition provides a unique insight into that journey, taking visitors though a museum set designed to look like the interior of Hogwarts School of Witchcraft and Wizardry, with book-lined, wood-panelled interconnecting rooms devoted to the subjects Harry learns about at school, namely potions and alchemy, herbology, charms, astronomy, divination, defence against the dark arts and care of magical creatures.

The exhibition brings together books and artefacts from the British Library’s own collection with items on loan from other institutions and individuals and combines them into a visually stunning array, beautifully-presented and well-interpreted whole, each accompanied by text that provides information on each item, placing each one in the context of both the history of magic and the Harry Potter universe.

I was utterly captivated from the first moment I stepped into the exhibition, with each room providing fresh enchantment. Folklore and the history of magic has been a research interest of mine for many years and it was an delight to see such items as the 3,000-year-old cauldron found in the River Thames in Battersea, London in the 1860s and a bezoar stone in a gold filigree case, believed to be an antidote to poison. Also in the exhibition is the enormously long Ripley Scroll, a manuscript based on the teachings of the alchemist George Ripley, which has only very rarely been seen in its entirety due to its length of almost six metres. But in this exhibition, it takes pride of place in a specially constructed cabinet in the middle of one of the rooms, easily viewed from each side, with interpretation along its length.

It’s rare in any exhibition to read all the text that accompanies every object, but on this occasion, I lingered by each item, taking in every word. There are delights aplenty, both for Harry Potter fans and students of magical history and folklore.

JK Rowling’s talent as an author needs no testimony, but what I hadn’t known before was her skill as an artist, bringing to live her own characters, particularly Harry, several years before the first book was published. Harry’s spiky dark hair and glasses ably foreshadow the casting of Daniel Radcliffe in the title role. The exhibition also brings together a large selection of work by other artists including illustrator Jim Kay who worked on several of the books, bringing both people and places to vivid, detailed life.

The book follows the exhibition, and each chapter is prefaced with a short essay from a specialist in each field including, amongst others, Julia Eccleshare, Director of Hay Children’s Festival, talking about Harry’s journey, and TV presenter Steve Backshall on the care of magical creatures. The layout is clear and easily accessible, with beautifully reproduced illustrations on every page. This is a book that can be read cover to cover, or dipped into, whichever takes your fancy.

Having seen the exhibition first, it was a delight to go back and read in more detail about the objects on display, from Rowling’s first letter to Bloomsbury, outlining the plot of the first book, to the oldest precisely datable object in the British Library’s collection, the ancient Chinese oracle bones, dating to 1192 BC. Questions wold be engraved on the bones then heat was applied to them and the resulting cracks would be used to determine the answers.

I was absolutely spellbound by both the exhibition and the book, and left wanting to re-read every one of Harry Potter’s adventures, this time paying more attention to the depth of JK Rowling’s knowledge of folklore and magic. This is a journey that no Harry Potter fan can afford to miss and the book provides a permanent work of reference for fans and researchers alike.