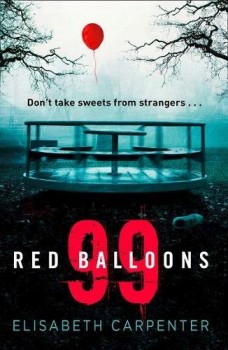 When a young girl goes missing on her way home from school, an intense police hunt fails to find any trace of her. Grace’s mother wants her back, but someone else wants to keep her.

It’s every parent’s worst nightmare. An eight-year-old girl goes missing on the short walk home from school. She was last seen in the local sweetshop with friends, but then she just disappears into thin air. The police are called and immediately launch a search, hoping to find Grace quickly. But as hours turn into days, the initial hopes turn inexorably to despair. Grace’s mother, Emma, clings to the hope that her daughter will be found, but elderly widow Maggie Taylor, who’s following the story closely, knows that there are some stories which are destined not to have a happy ending.

At first, I found some aspects of 99 Red Balloons quite confusing, despite the majority of chapters being marked with the name of the narrator. Stephanie, Grace’s aunt, kicks off the story and Elisabeth Carpenter returns to her frequently as the story progresses. At first, I thought Maggie was Emma’s mother, but then that turned out not to be the case, and gradually I began to twig to how Carpenter has constructed her immensely clever, compelling story that quickly rises about the vast number of missing kid stories that have flooded the genre over the last few years.

Carpenter’s great strength is her ability to get into the heads of her characters, and once I had everyone and their relationship to each other straight in my mind, I settled down for a disturbing and enthralling journey. But don’t expect all the answers to the questions of who is connected to who to come out too soon in the narrative. Reading 99 Red Balloons is a bit like watching a dog playing with one of those toys where it has to excavate treats rather than just doing a simple trick and getting a reward. There are no simple tricks in this book, just damn good writing and immaculate plotting.

I make no secret of the fact that I think the market has become swamped with books about missing kids and dark family secrets, but Carpenter quickly grabbed my attention and didn’t let go. The characters are well-drawn and only gradually give up their secrets, and although the seeds of deeper intrigue are planted quite early on, it takes a while for them to grow to maturity.

There’s nothing simple or stereotypical about 99 Red Balloons. Carpenter’s writing has strength and depth. Her story is well thought out and cleverly executed. Just push aside any early confusions – everything is there for a reason – and settle down for an emotional ride. This is one of those books that I just wanted to go on and on. The ending was handled with skill and care and I felt wholly satisfied with how things came together, but I would have still happily carried on reading. I didn’t want to say goodbye to Emma, Stephanie, Maggie and their families.