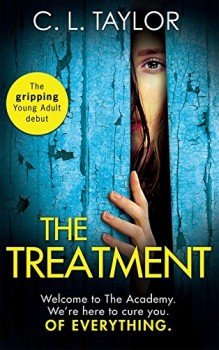 Unless Drew Finch can find a way out of the Residential Reform Academy, she faces the prospect of losing herself and her brother to a deeply sinister treatment that will change them both – and not for the better.

Drew Finch is a typical 16-year-old. She wants her own space and to spend time with her friends, not her mother and stepfather. Her real father went missing when Drew was a lot younger and no one talks about him now, not even her 15-year-old brother, Mason. He’s in the difficult teen stage and has run through a variety of schools, with his behaviour steadily getting worse, until he’s finally consigned to a residential academy in the wilds of Northumberland that specialises in reforming rebellious youngsters and turning them into productive members of society.

Drew isn’t particularly sorry to see Mason go, although the house does seem a lot quieter without him. But when a mysterious stranger thrusts a note into Drew’s hands that the woman claims has come from Mason, Drew isn’t prepared to stand by and do nothing, not when her brother is pleading for help.

Matters take an even more dramatic turn minutes later when the woman is knocked over by a hit-and-run driver and killed. Drew watches it happen and knows that the woman was killed deliberately, but no one believes her, so she has to do her own investigating and soon realises that the only way she’s going to be able to help Mason is from the inside, as no one on the outside is willing to listen to her, not even her mother.

The Treatment, CL Taylor’s YA debut, is a fast-paced gripping teen thriller that pits one girl against the weight of the establishment in odds that seem insurmountable. The stakes are high: if Drew doesn’t succeed in breaking her brother and herself out, they’ll both undergo the deeply sinister treatment that turns previously rebellious kids into brainwashed zombies with little or no free will left.

The Residential Reform Academy is chillingly evoked, with the teenagers watched over by CCTV cameras everywhere other than the bathroom, and supervised by aloof staff and fake ‘friends’ who are more like spies than counsellors. Drew shares a small dorm room with gossipy, nosy Jude and the deeply withdrawn Megan, quickly nicknamed Mouse by sharp-tongued Jude.

Drew’s race against the clock gets off to a bold start and the pace doesn’t ease up for a minute. There’s something uncomfortably close to reality in Taylor’s depiction of Britain in the grip of an uncaring government, determined to be rid of problems in a chilling social experiment that I’m sure would find its supporters were it to be proposed now.