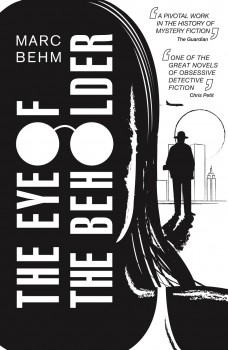 The Eye of the Beholder

An end-of-his-rope private eye becomes obsessed with a beautiful female killer and pursues her for more than 20 years.

Don’t be put off this bleak, obsessive, chronicle of crime and murder if you had the misfortune to see the 1999 Canadian-British-Australian film! Despite the casting of Ewan McGregor and Ashley Judd it was both a critical and box office failure, largely due to attempts to over-modernise Marc Behm’s seminal work – it was written and set 20 years before – and to the story being slashed to the point of being almost unintelligible.

This strange and chilling combination of private-eye novel and psychological suspense story, set in a cold and abusive wasteland where Hollywood scriptwriter Behm’s principal characters drift almost aimlessly across a dangerous and uncaring America, is a strange story of obsession, murder, loneliness and love.

The main characters are a psychologically damaged, beautiful and seductive former care home girl who, shadowlike, shifts her name and appearance each time she finds a new victim. The only constant in her life is that they are all wealthy – and all wind up dead! She is pursued by a nameless, at-the-end-of-his-rope, driven and obsessed private eye, originally hired by the parents of one of her early victims to trace his movements.

From the moment she walks into the view-finder of his camera she becomes the centre of his universe. All other questions become secondary, except that of his own missing daughter, as he observes then, as his dangerous fantasies mount, begins to aid her cross-continental killing spree, while at the same time never revealing himself.

This is a hypnotic journey spread over more than 20 years which will leave you questioning the definitions of love and compassion as Behm cleverly blurs the line between the two. Is it a tragic story of unspoken love or a disturbing novel of obsession? This fast-paced, tight, psychological page-turner hardly gives the reader time to think.

Some may be put off by the coldness and cruelty of the narrative, its lack of what most would recognise as any genuine emotion. Behm does an outstanding job introducing feelings of suspense, discomfort and fear until the climactic end of this spooky and chilling relationship.

While strong on the dark side, he is no great literary author. The story is somewhat contrived, clunky, and some of his characterisations are a bit thin and the dialogue positively weak.

Fortunately, this strange, sad story is intriguing enough to keep your eyes glued to the page and make this a book – like its follow-up and mirror image twin Afraid To Death – you will not easily forget.