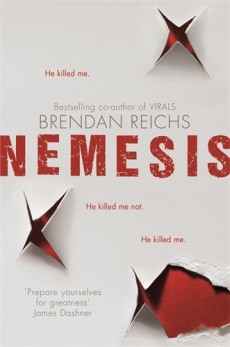 Every other year since Min turned eight, she’s been hunted and killed by a sinister man in black. Every time, she wakes up, alive and unhurt, but knowing the nightmare was real, and it isn’t ending any time soon.

Min hates her birthdays, especially those in the even-numbered years of her life, because those are the days on which she is stalked by a man in a black suit, his eyes hidden behind his sunglasses, who is determined to kill her. And he always succeeds. On one occasion Min was pushed to her death into the deep gorge that surrounds the isolated town in Idaho, on another she was shot, and so it goes on. But after each death, Min wakes up, alone and unhurt, in the woods near her trailer park home.

As a child, she made the mistake of telling the truth, expecting to be believed, but instead, she was made to see a therapist who has done his best to convince her the experiences were nothing more than a product of her imagination. Min now takes the easy way out – she simply doesn’t tell anyone what happens to her every other year.

Min’s problems are set against the backdrop of a world in the grip of terror. A huge asteroid, The Anvil, is hurtling through the galaxy and no one is sure whether it will miss the Earth, or hit it, blasting the planet to pieces and bringing instant death to all its inhabitants. People are terrified, waiting for the news that might deliver their death sentence. Min is no stranger to dying, but if the Anvil strikes, there will be no woods left to wake up in.

Nemesis is Brendan Reich’s solo young adult debut, following The Virals, the series he co-authored with his mother, Kathy Reichs. The book is a complex techno-thriller with a plot as tortuous as the Gordian Knot. The pace is fast, told in a series of sections alternating in point of view between Min - real name Melinda, but don’t call her that unless you have a death wish – and Noah, a boy from a very different background. His father is mega-rich and they live in a palace of a house, utterly different from Min’s upbringing on a shabby trailer park. The only thing they have in common is that Noah is in therapy, too. The two teens must bury their antipathy to each other when it becomes clear that they have more in common than they might think.

Nemesis completely absorbed me, and I just about managed to hang onto the coattails of the plot as it hurtled along with the speed of a toboggan on a very steep run. The book takes some unexpected changes of direction and at times had the feeling of suffering from One Damn Thing After Another syndrome, but I certainly can’t accuse it of lacking interest! The build-up to the climax occasionally frayed the thin thread suspending my disbelief and, to be completely honest, I finished the book not having a clue whether Nemesis is a standalone or the start of a new series. There are certainly enough loose ends to merit a sequel, but it’s hard to see how Reichs can top the plot he’s set up here. If he gives it a go, a wild ride is pretty much guaranteed.