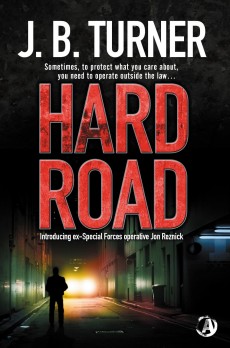 Jon Reznick is a hard man doing a difficult job. When he fails to carry out an assassination, he unwittingly makes his 11-year-old daughter a pawn in a very dangerous game.

Ex-special forces soldier Jon Reznick works in a shadowy world of officially sanctioned executions. It’s dirty work and he does his best to keep his 11-year-old daughter well away from it. But when he fails to carry out his instructions to kill a man in a hotel bedroom, he unwittingly makes her a pawn in an extremely dangerous game.

Reznick commits the cardinal sin of questioning his orders, and it soon becomes apparent that he can’t trust anyone, not even the man who’s been his handler for several years. Reznick ends up on the run, determined to get his daughter back from the men who have abducted her and also filmed the brutal killing of his mother-in-law, just to show him how serious they are.

The more Reznick digs, the murkier everything around him becomes, but he has to trust someone and that person turns out to be the hard, competent FBI assistant director, Martha Mayerstein. She’s doing her own digging under extreme pressure, and with Reznick’s help uncovers a terrorist plot to cause havoc in the very heart of Washington DC.

A lone person’s struggle against seemingly insurmountable odds has always been a staple of thrillers and used to good effect – as J B Turner does here – this trope provides as good a backdrop as anything the genre has to offer. Reznick is tough, resourceful and very, very determined. He lost his wife in the 9/11 atrocity but there’s no way he’s going to lose his daughter as well. He’s also not prepared to be used as a pawn in someone else’s games and he makes that clear.

For a thriller to work for me, I have to either like or empathise in some way with the main character and, too often in thrillers, the writers make it hard to like an over-hyped tough guy who wise-cracks his way through a series of adrenaline-filled encounters. And for the record, no, I don’t like Jack Reacher’s particular brand of machismo. But I do like Matt Hilton’s Joe Hunter and Jon Reznick falls very firmly into that category. Turner pulls off the beleaguered protagonist scenario with a great deal of style and energy. The action scenes are fast and vivid, and the final pursuit rattles along at an impressive rate.

Reznick is a character I’d like to see more of, and I very much hope Martha Meyerstein comes along for the ride as well. She’s that rarely seen thing, a tough woman written both sympathetically and believably by a man.