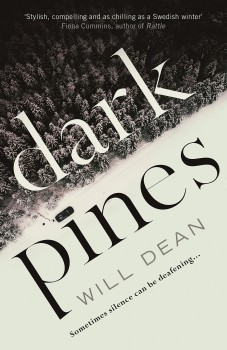 Tuva Moodyson, a deaf local paper reporter, dreams of a story that could make her career. Two bodies, their eyes cut out, copies of three unsolved murders 20 years before, give her the chance – and plunge her into secrets and fear in the dark forests.

How many Brits does it takes to write a Scandi-noir sounds like a bad conundrum. But if the answer’s Dean, it’s just one! This claustrophobic, creepy and compelling debut is as good as any – and better than most – homegrown offerings. Living, as he does, in a self-build wooden house in a boggy forest clearing in rural Sweden, he’s halfway there from the off. The dark and depressing pine woods provide a haunting setting for what is a stylish, atmospheric and beautifully written thriller with a fascinating narrator.

Tuva Moodyson, is a young reporter on a local paper. She dreams of the story that could make her career and take her away from the predictable and boring routine of a typical small country town. Like all good Scandi sleuths Tuva has her own problems. Her father is dead, her mother dying and she is near deaf – functioning only with hearing aids. It is a mark of Dean’s talent that this catalogue of woes never intrudes on a story which is both thought-provoking and often deeply unsettling. Her longed-for break comes with the discovery of two bodies in the forests which surround the town. Both have been shot. Both have their eyes removed – carbon copies of three unsolved murders from 20 years earlier.

As she investigates the killings, Tuva must unravel a web of secrets, outwit a killer who wants to add her to the list of dead – and overcome her own fear of the sinister forests which hold the answer.

Tuva is a mass of contradictions. Happy to be away from a London internship with all its temptations, including drink, yet desperately seeking the break which could return her to the bright city lights; unsure of her own sexuality; conflicted over her relationship with her mother; still occasionally having to come to terms with her own disability; gutsy yet frequently uncertain, she has all the characteristics of the classic Scandi heroine.

Her problems are compounded by the chilling and atmospheric setting – rural Sweden resounding with gunfire at the start of the winter hunting season – a supporting cast of often weird characters who positively jump off the page, racism, horribly lifelike trolls, small town secrets and attitudes, Dean throws it all in.

The tension builds from Tuva’s opening confrontation with a bull moose on a narrow forest track, all the way through to the dramatic end. It is taut, at times spine-chilling tense, a classic Scandi-noir with fresh, modern writing. If it has a fault, the killer will be easy for the experienced reader to spot, and Dean has little idea of newspaper hierarchy. But this confident debut marks him out as a talent to watch.