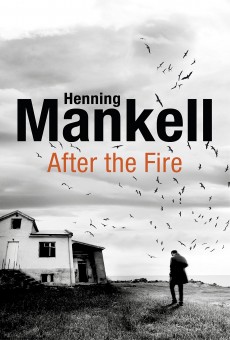 Fredrik Welin was lucky to escape the fire in his home alive, but now he must rebuild his life, and find out who wanted him dead.

Fredrik Welin wakes in the night to a light being switched on in his isolated house on a tiny island off the Swedish archipelago. But it is no ordinary light. It blinds Fredrik, disorientates him, and only then does he realise his house is on fire.

He escapes, wearing nothing but his pyjamas and two left-foot wellingtons. It’s bad enough for anyone to witness their identity and their past going up in flames. But as a retired doctor, almost 70 years old, and with few friends, Fredrik is utterly lost.

Jansson, a retired postman, is hardly a bosom buddy, with his irritating hypochondria and probing curiosity. But he is a significant help in the first few days after the fire. And he is far easier to handle than Fredrik’s volatile and almost estranged daughter, Louise.

Fredrik is lonely and forced to take refuge in his semi-derelict caravan, where he struggles to recapture his will to live. But his situation is about to deteriorate further when he learns he is the prime suspect as the arsonist who destroyed his home.

I try to not prejudge, so have a habit of removing the sleeve of hardback books to avoid reading the blurb or author’s biography before I delve into the story. But from the start, the overwhelming melancholic theme made me question not just the plot, but also the author behind the narrator’s voice. When I realised after that this is Henning Mankell’s last book, I was not surprised. Yes, there is a crime, yes there is mystery, but this story is about mortality, regrets, love, loss, and reads as if it is about someone putting his affairs in order. Its emotional intensity gave me the sense of the author foreshadowing his own death.

Perhaps that is why, even though the protagonist is a rather self-absorbed, miserable and unforgiving septuagenarian (a character who would not normally appeal to me), I found the book strangely addictive, and utterly haunting. After the Fire is written in the first person past tense, with a unique and convincing voice; the reader could be forgiven for almost believing that Fredrik is somewhere on the lower end of the autistic spectrum. The writing style reminded me of the non-fiction book, Born on a Blue Day.

The plot is simplistic, but this does not detract from the pleasure of reading the story. And from the start, the quality of writing, along with attention to brief detail made me certain the end would not be a corny, cheese-coated reveal. I was not disappointed. Quite the contrary. The criminal gives nothing away, merely leaves the protagonist speculating. I would even go so far as to say there are loose ends left fluttering on the icy coastal breeze.

Each of the main characters is a study of dark and light, making them realistically flawed, although occasionally I found certain aspects of their behaviour unexplained and irrational. I didn’t like any of them, yet found each one fascinating.

Mankell’s talent for description draws the reader in so effectively that one feels the cold, the desolation, the isolation. Reading this book took me on a journey, and subtly gave me a virtual experience of the Swedish coastline. Marlaine Delargy’s translation is excellent, and there is no loss of the stark, bleak writing style that so suits the plot.

Mankell fans will sense the adieu in After the Fire, and if anything like me, will close the book with a real sense of loss. I would suggest that readers new to this author start with one of his many other excellent books. And I’d add as a final note that although this is a fast read, it is not an easy read emotionally.