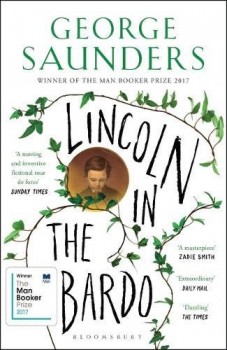 Lincoln in the Bardo

President Lincoln’s son is dead, existing in a place between life and death. His father can’t stop visiting his body, but others are conspiring to enable Willie Lincoln to pass on.

President Lincoln’s son Willie dies tragically as the American Civil War is raging. His body is taken to Georgetown cemetery and Lincoln cannot stop himself visiting the body. Meanwhile the spirits of many of the deceased, who are existing in the Bardo, the place between life and death, conspire to enable Willie Lincoln to pass on.

To some extent the story contained within this extraordinary novel serves as a vehicle for a means of storytelling that is both innovative and creative. The story of the death of William Wallace Lincoln at the tender age of 11 is recounted by extracts from a diverse range of contemporary documents, reports and books. It is not clear if these quotations are truly contemporary or the work of the author, but the effect is to give an insight into the prevailing moods of the times, the attitudes the public have to Abraham Lincoln and comments about excessive spending, frivolity, personality and privilege. The quotations also make clear the heartbreak caused to both Lincoln and his wife by the path of their oldest son.

Meanwhile, the story of what is happening to Willie Lincoln, now interred in a crypt in a cemetery in Georgetown, is told mainly by the voices of three spirits, all of whom do not really appreciate the fact that they are dead. They spend the day in their ‘sickboxes’, and at night are free to communicate with each other, to interact with a large cast of other spirits, and to retain enough humanity to care about the fate of the newly deceased son of the President, although they are, to start with, entirely unaware of who he is, being only aware of what had happened to them before their demise.

All dialogue or reporting is presented in short, attributed quotes. This device, after the reader has adjusted, provides a fluent and high evocative depiction of the unfolding of events at the time of the story and also very detailed depictions of attitudes and life, class and privilege, racial tension and also a surprising level of human depravity at the time in which the novel is set. The net result is a story that moves forwards at a remarkable pace, and in which the reader develops emotions and feelings for the main protagonists.

This book is an amazing feat of creativity and writing skill. It deservedly won the Man Booker Prize in 2017.