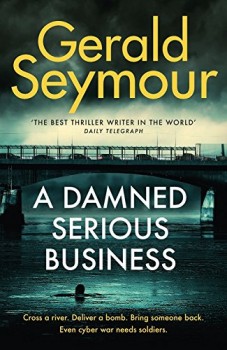 MI6 officer Edwin Coker known as Boot for his obsession with the Duke of Wellington and Waterloo, puts together a daring plan to combat Russian cyber terrorism and recruits a British mercenary to carry it out.

Since Gerald Seymour burst onto the scene 40 years ago with Harry’s Game, his definitive novel of the Troubles, he has been at the forefront of British thriller writing. The strength of the former ITN reporter who covered most major world events – the American defeat in Vietnam, Ulster, the massacre of Israeli athletes at the Munich Olympics – of his 15 years before the cameras is that he has always been right up with, if not actually ahead, of the news.

The scenario posed by MI6 whiz-kids of violence erupting on estates around any major northern city deprived of benefit cash by hackers attacking Social Security and banking systems, is all too viable. We read every day of the ‘Black Hats’, often freelance hackers working for the FSB – the Rossiyskoy Federatsii or Russian security service – or criminal gangs involved in massive thefts of personal information, electoral interference, disruption of commercial and social services, banks and airlines.

When details of a meeting of operators and their handlers fall into his hands through a entrapped hacker, MI6 case officer Edwin Coker, known as Boot for his obsession with the Duke of Wellington and Waterloo, conceives a plan to strike back, using conventional means to damage the operation, spreading fear and distrust.

They recruit a loner, Merc, a former soldier fighting in Iraq, a mercenary who knows how to get out of a tight spot, to deliver an explosive package from Estonia into Russia and bring the compromised hacker out. But from the moment he crosses the River Narva with a small team of unreliable local anti-Russian activists, things do not go to plan and this becomes a classic story of pursuit and evasion and a battle for survival.

The story is a classic Seymour with all his strengths – audacity, believability, impeccable pacing and a diverse ensemble of supporting characters. The first six or seven chapters are almost glacial as Boot sees his opportunity, assembles his plan with the accent on deniability and struggles to sell it to the bureaucrats of MI6. The second is all brilliantly described action, superbly researched and imagined and full of authenticity.

Boot himself is something of a throwback with more than a touch of John Le Carre’s legendary George Smiley – an old Cold Warrior, sidelined by the brief thaw in East-West relations, but back in favour to deal with the new threat from Putin’s Russia.

Those who like their thrillers simple will point to the fact that many of the characters are archetypical and their dialogue and actions reinforce that. They will criticise Seymour’s use of fleshing them out through giving them a quirk – Boot’s obsession with Waterloo, Merc’s dream of owning a top-of-the-range Merc, claiming that beyond this facade there is little emotional core and that their stoicism feels unrealistic. These critics are people who have never experienced, or do not have the wit to imagine, the stresses of combat or the responsibility for sending others into danger, when emotional sensitivity is an unnecessary luxury and trivial fantasies assume enormous importance as a relief from – and a means to – the business of survival.

Overall, like most of Seymour’s books, this is not an easy read. It is long, often staccato, and demands the reader’s full attention and involvement. If many of the protagonists or their opposition end up pretty much where they started, that is a factual reflection of a situation neither side is willing to admit – and all too frequently the outcome of such operations, successful or not.

But once again this brilliant, occasionally brutal, but informed and realistic story reinforces Seymour’s position as by far the best thriller writer of his time.