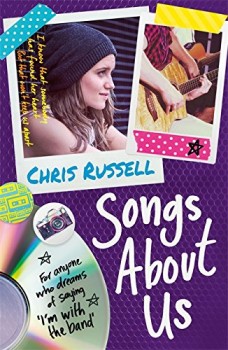 Charlie Bloom is back taking photos of world famous boyband Fire&Lights, but cracks are starting to appear in the gloss and hype that surrounds the band and Charlie is faced with some difficult choices.

Charlie Bloom’s life is almost back to normal after the emotional rollercoaster of her involvement with teen music phenomenon, Fire&Lights. Charlie’s photographic talent propelled her into the limelight and the lies she had to tell to explain her absences threatened to wreck her already strained relationship with her father. Add to the mix lead singer Gabriel West and band member Olly Samson and things became a tad fraught. Charlie is just pleased to be back to something approaching a normal life.

But naturally, things don’t stay that way and Charlie is inexorably drawn back to the world of Fire&Lights. She’s also doing her best to dig up any information on a 1990s band called Little Boy Blue, in the hope of learning why her mother seemingly abandoned her as a baby to follow the band. There’s also a tie-up with Gabe West, as his father was a member of Little Boy Blue and it seems that Charlie and Gabe knew each other as children, although Charlie has no memory of that.

I was absolutely bowled over by Chris Russell’s staggeringly good YA debut, Songs About a Girl, and Charlie’s latest tribulations in the equally engaging Songs About Us certainly does not disappoint on any level. Russell’s deep knowledge of and affection for the emotionally-charged world of teenage ‘bandom’ shines through on every page. His depiction of the fans always rings true and he manages to make Fire&Lights seem absolutely real, something that almost never works when writing about fictional celebrities. Gabe, Olly, Yuki and Aiden could be straight out of Britain’s Got Talent and it’s not hard at all to imagine them catapulted into almost instant stardom.

Gabe is moodier than usual, and his relationship with the other band members is strained. Yuki is hitting the booze, and maybe even drugs. Olly is frustrated that he’s not being given the chance to prove that he can write songs too, and Aiden, the quiet one of the group, is rumoured to have a celebrity girlfriend. The cracks are starting to show, and even Charlie is struggling to be the glue that holds the boys together. Charlie is torn between stable, caring Olly and the more mercurial Gabe. Gabe’s pushed her away, so he has no right to be jealous when Charlie starts going out with Olly, but right or wrong doesn’t enter this tangle of teenage relationships, there’s only feelings, and Charlie can’t help having feelings for both of them.

It would be very wide of the mark to categorise Chris Russell’s series as a tale of teenage angst. Songs About Us and its predecessor are much more than that. There’s an intriguing mystery at the heart of the books as Charlie edges closer to the truth about her mother’s life – and death. The book has a sharp, dark edge when it looks back at the past and it’s painful to watch the possible disintegration of Fire&Lights as pressure mounts and the media vultures hover overhead waiting for rich pickings.

The conclusion to this strong, well-written teen trilogy can’t come soon enough for me. I desperately want Fire&Lights to work through their problems and for Charlie to make her peace with both her father and emerge from the shadow of her mother’s death. And I want a happy ending for Charlie and the boys too, and I can’t choose between Gabe or Olly. I don’t have to, do I?