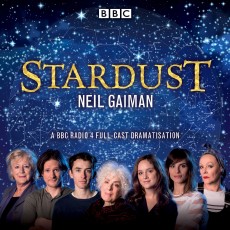 A young man travels to the realm of Faerie to find a fallen star and win the hand of a lady.

In the time of young Queen Victoria, the small town of Wall lies in the shadow of the imposing barrier that gives the town its name. The wall divides the town not just from the grassy field on the other side, but also from the realm of Faerie. The inhabitants of the town stay well away from the meadows on the other side of the wall, and they do their best to forget about what lies beyond it.

Beyond the wall, the Lord of Stormhold lies dying, surrounded by his avaricious sons, some alive, some dead. He promises the kingdom to whichever of his sons can retrieve the beautiful topaz pendent that he threw away so hard that it knocked a star from the sky.

Tristran Thorn lives in Wall, and is hopeful of wooing Victoria Forrester, but she isn’t easily swayed and one night when they are watching the stars, one falls from the sky. Victoria promises Tristran a kiss if he finds the fallen star and brings it to her. Tristran’s promise takes him to the other side of the great wall and into the perilous land of Faerie.

This is in many ways a traditional quest narrative, where a young man sets out to win the hand of a fair lady, but Gaiman succeeds in putting his own slant on this with unicorns and flying ships and a goat turned into a man all thrown into a cheerfully colourful mix. The voice of Billy, the former goat, was a particular joy, with the faint, harsh baa at the back of each word conjuring up the most perfect mental image of what the witch had done.

This BBC dramatisation of Neil Gaiman’s classic fairy story stars Matthew Beard as Tristran and Sophie Rundle as Yvaine, the fallen star, with Eleanor Bron as the story’s narrator. The cast effortlessly evoke both the wonder and strangeness of Faerie, with its evil witches, dangerous lords and all manner of strangeness. Bron’s narration is excellent, and the story flows well, with both depth and flashes of humour.

Nothing is ever quite what it seems in Faerie, and although this is a relative straightforward narrative, there are still surprises in store.