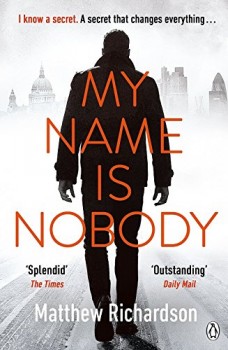 My Name Is Nobody

Solomon Vine, a highly rated MI6 officer, is suspended when a prisoner whom he is interrogating is shot. However, his suspension proves useful when the Head of Station in Istanbul is abducted and an unofficial investigation is required.

Solomon Vine, a highly rated MI6 officer, has been suspended from the service following the shooting of a prisoner and is awaiting a decision about his future. It is November 2016, three months after that incident, and, quite out of the blue, he receives a note from Cosmo Newton, chair of the Joint Intelligence committee, asking for a meeting. He explains that Gabriel Wilde, the MI6 Head of Station in Istanbul, has disappeared, all the evidence indicating that he was abducted. Furthermore, Sir Alexander Cecil, Head of MI6, has simply replaced Wilde as Head of Station and is making sure that the abduction remains a secret.

Newton, who had initially inducted Vine into the secret services, doesn’t trust Cecil and, determined to find out the reason for the secrecy, asks Vine to look closely into Wilde’s history. He gives him some names as a starting point - a Member of Parliament, the Deputy Head of Station in Istanbul, a professor who knew Wilde at Oxford – and asks him to begin his investigation. Vine, who had always regarded Wilde as a friend until he seduced and subsequently married his girl, Rose, agrees to do as Newton asks.

He begins to discover information that appears to implicate Wilde and when a murder occurs he is convinced that it is connected with the investigation he has been making into Wilde’s past. One thing he knows for sure is that there is a mole leaking information. Rather mysteriously he receives what he regards as a coded message from Wilde, together with his prize-winning translation of the Odyssey, undertaken when he was at Oxford. He is convinced that the message is vital to his investigation, but he can make nothing of it.

This novel, the first by Matthew Richardson, is very promising and there will almost certainly be a large number of people waiting for the next one. It is obviously difficult for the lay reader, unacquainted with the workings of the ‘real’ intelligence services, to comment on the way in which they are represented in literature.

The one thing which can be stated with absolute conviction in this case is that, whether or not the account of them is totally accurate, it is without question totally convincing. The depiction of tradecraft, for example – particularly how to follow someone or how to avoid being followed – is exactly how we feel it ought to be. There is perhaps rather too much London geography and anyone unfamiliar with the city may find the passages involving one street name after another a little difficult to take in, but on the whole the capital and its secret life appear wholly real.

Whilst a casual analysis of the plot might conclude that it is slow moving, it doesn’t feel like that to the careful reader. Care is required because the book does become rather complex as Vine tries to come to terms with contradictory information. Eventually, however, the message is decoded and he suddenly knows the identity of the mole. After that the action speeds up to a very tense finale.