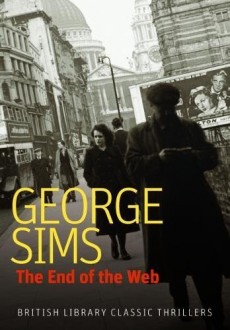 The End of the Web

When a philandering, middle-aged antiques dealer is found dead next to the body of a beautiful younger girl, his widow asks ex-detective Ed Buchanan, a family friend, to investigate.

George Sims, an antiquarian bookseller, was little known during his writing career in the 1970s. His cleverly plotted and often innovative novels, although they proved popular with his readers, were considered too quirky by most mainstream publishers. If they had known what was revealed after his death, he might have been promoted sufficiently to be ranked alongside Ian Fleming, that other fine literary product of the intelligence services.

The son of a London policeman, Sims spent his wartime service in the Intelligence Corps as part of the secretive codebreaking and agent running operation at Bletchley Park, at one time the liaison officer for a Phantom signals unit behind enemy lines. A reclusive man with an offbeat sense of humour, his avoidance of formulaic writing and a belief that a plot in real life should corresponded to a secret in the past which was at the heart of his stories, made them unpredictable. This story, first published in 1976, is just that.

Moderately successful middle-aged antiques dealer Leo Selver compensates for a troubled private life by chasing younger women. When he is found dead, together with a brutally murdered girl, it is assumed he was the killer. Selver’s widow refuses to accept the obvious and calls on Ed Buchanan, a former London detective, who she has known since childhood, to try to clear his name.

As Buchanan, a one-time boxing champion, who Sims – himself a former amateur – portrays with both sympathy and some humour, investigates, he uncovers a ring of dealers, where Selver was an unwilling member. The bullish leader of the ring has disappeared. Selver is dead and the third member has fled into hiding abroad. It becomes clear that somewhere in their illegal dealings they had uncovered a secret that someone is willing to kill to protect.

Buchanan pieces together clues from scraps of notes left by Selver, and helped in his quest by the dead dealer’s attractive assistant, uncovers a treasonable plot which involves influential men at the very peak of society – and a disturbed and vicious murderer.

The British Library have kept up and enhanced the reputation of their Classic Thriller line with the re-release of this clever and unorthodox tale of the unexpected. It’s a fine read, although hardly more than a short story, combining intelligence and action and should draw readers’ attention to an, up until now, very underrated author.