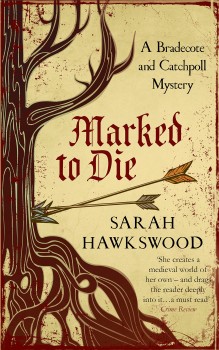 A mysterious archer leaves a string of corpses in his wake as he leads attacks on the salt road from (Droit)Wich. When a local lord falls victim, the Sheriff of Worcester dispatches Hugh Bradecote and Serjeant Catchpoll to put a stop to the attacks.

Marked To Die is the latest – and best – chronicle of Sarah Hawkwood’s books featuring two very realistic and likeable characters: the 12th century detective duo of Bradecote and Catchpoll.

When they first appeared two books ago, the bright but naive minor aristocrat Hugh Bradecote was totally out of his depth as Under-Sheriff of Worcestershire. Intelligent – he speaks good English at a time when the language of his class was Norman French – keen, but occasionally given to the assumption that social position equals knowledge, he was in many ways beholden to his rough, tough, been-there-and-done it Serjeant.

Catchpoll is a typical old-school senior NCO. A close-mouthed, irascible, hard case, who goes beyond his statutory duties, has his finger firmly on the criminal classes and is happy to use the mailed fist when he feels it necessary. He’s sarcastic, brutal, never too bothered by rules and worried that his inexperienced officer should not interfere with his running of the business of enforcing the law of the land the way he sees fit.

Like most young officers, Bradecote has learnt from experience and developed his own detective and leadership abilities. The death of his wife has hardened him and events in this story see him emerge as a genuine commander, as well as uncovering feelings he hardly knows he possesses.

The relationship between the two has developed and changed from one of irritation and near despair on the part of Catchpoll to one of mutual respect – and the addition of the eager Walkelin, a young man at arms with a fertile brain and an understanding of the criminal mind – as Catchpoll’s chosen apprentice has built them into a formidable investigating unit.

In October 1143 winter is settling on Worcestershire. A train of pack mules goes missing on the salt road from (Droit)Wich, its drovers killed by a mysterious and deadly archer who kills cleanly then disappears into the forest. When a local lord of the manor interrupts the robbery and is shot down by the bowman, the lord Sheriff cannot ignore the death of one of his own liegemen.

Bradecote, Catchpoll and Walkelin, are dispatched to find the killer and the robbers with whom he operates, and more importantly who is providing them with information about the salt convoys and giving them orders.

Faced with a seemingly impossible investigation – no witness, no evidence, no clues – they gradually piece together a series of thin leads, but their inquiries are hardly helped by a reeve keen to curry favour to keep his own position, various unpleasant aristocrats with their own agendas – and the beautiful but distrusting and vengeful widow with a haunted past, to whom Bradecote is increasingly attracted.

This medieval procedural charms its way past all obstacles. Whether it’s action, reflection, personal feelings, simple, but vivid, description, humour, or even repeated gossip, Hawkswood’s elegant prose will keep you turning the pages. Her ability to bring even the most minor characters to life in a credible and well-researched setting gives this story a must-read quality.