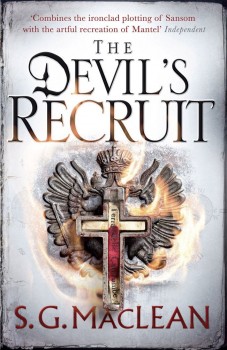 College lecturer Alexander Seaton investigates the disappearance of a Highland clan chieftain's son and the death of a teenage girl, and is drawn into a web of lies and betrayal linked to his own past.

Alexander Seaton, university teacher and would-be minister of the Kirk, is turning out to be just as pompous and self-righteous as those who drove him from Banff earlier in S G Maclean’s fascinating series based in the Scotland of the early 17th century. Most of his troubles in this, the fourth book, are self-generated, both in the past and present.

For a man aspiring to become a minister of the strict and prescriptive Calvinist faith, he exhibits a remarkable moral flexibility when it comes to friendships of either sex. Some might go so far as to brand him a hypocrite, but he is, in fact, a very realistic representation of the dilemmas that split Scotland at the time and continue in some respects to this day.

The Devil’s Recruit is set against the background of the brutal and bloody Thirty Years War (1616-48) in which more than 50,000 Scots fought for the Protestant cause, mainly in the German lands of the former Holy Roman Empire, in an increasingly complex religious and territorial struggle against the Catholic Habsburgs. This is a tale of betrayal and revenge as much as a murder mystery.

One of Seaton’s students, the reckless and arrogant son of a Highland chief, goes missing after having met recruiters for the Protestant cause in a low Aberdeen tavern. His friend is later found  bloodied and dazed and becomes a suspect in the disappearance. As Seaton investigates, the plot thickens, leading to killing of a young girl and the discovery of an active Catholic community, involving many of the strictly Calvinist city’s leading lights who are ministered to by an undercover French priest.

Maclean, who lectures in 16th and 17th century Scottish history at the University of Aberdeen, puts her knowledge of the period to good use to evoke the morality and atmosphere of the time. The cold and rather hostile city on the Dee springs to life under her pen as she explores the undercurrents of clan and religious loyalties which divided so much of Highland Scotland.

These divisions are nowhere more evident than in the complex character of Seaton as he struggles with the rigid mores of his faith, his past loves and friendships and battles to reconcile them. As the plot climaxes in a dramatic North Sea storm, he is forced to realise that although he may have the answers to the mystery of two deaths, he has failed both as a husband and as a man of faith.

As always, the research is brilliant and evocative and the book intelligent, enthralling and beautifully written. But as, at the close, a troubled Seaton flees the memories of his own weaknesses and failures to a tiny collegiate church in the far north, you wonder if we are going to see this frequently exciting, but flawed character again.