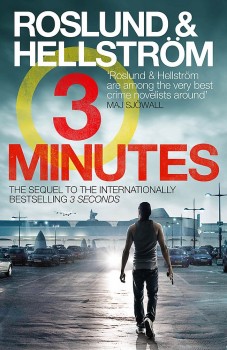 Former government agent Piet Hoffman is on the run from his old life in Sweden. Now he tries to survive as an infiltrator of the Colombian mafia on which he also informs for the Americans. Then things get terribly complicated.

If you ever consider that your life is complicated, and you have too many conflicting responsibilities, then think again. The latest offering from Swedish duo Anders Roslund and Börge Hellström shows that some people have more than enough on their plate, or a set of spinning plates, each dangerously close to destruction …

One-time Swedish government agent Piet Hoffman is a fugitive from his old life, and from the Polish drug mafia that he has betrayed. Also, he has somehow managed to escape from prison though officially he’s a victim of a shooting. Now he lives under a false identity in Cali, Colombia, together with his wife Zofia and two sons Rasmus and Hugo. The boys have no idea of their perilous circumstances. The only person who knows of Piet’s real identity and existence far away from Europe is his former handler Erik Wilson.

Life on the run is treacherous. In order to survive he accepts an offer of employment from a Colombian cocaine mafia and reluctantly becomes a bodyguard and hit-man for the reckless El Mestizo, and so his position steadily rises within the group. At the same time, he’s approached by the US DEA to infiltrate the same cartel and he decides to go for it, mostly to make more money for the future in a better place.

Hoffman tries to juggle his three existences as an informant, infiltrator and stressed-out family man, owner of a ‘legitimate’ business. So no wonder that his apparently successful balancing act is impossible to sustain ultimately, and it becomes untenable when the American element of the puzzle goes completely wrong.

Timothy D Crouse, chairman of the US House of Representatives, decides to travel to Colombia and see the progress of the war on drugs and terror. Crouse’s daughter was one of the victims of the drugs brought to the US and he cannot give up the fight. Yet as he’s kidnapped and held in a cage in the relentless heat of the jungle, the attention focuses on Hoffman who becomes the man whom everybody now wants to kill. Again.

Erik Wilson’s influential contact fails to convince the American government that Hoffman, also known by his code names as Piet, Paula and El Sueco, seems to be actually a good guy in this game, as much as he can be in the world of guerrilla fighters, brutal killings and corruption. Wilson has no other option but to send a rescuer on a secret mission to save Hoffman and bring him and his family back to Sweden. The stubborn Swedish detective DCI Ewert Grens, the enemy once tricked by Hoffman, might become the unlikely hero but only if both men manage to work together in total secrecy.

The authors of 3 Minutes, journalist Anders Roslund and reformed criminal Börge Hellström, have created an intense pacey thriller, populated by vivid characters, difficult life stories, violence, corruption and big money, prostitutes, children who kill, and officials easy to bribe. It’s all there. Desperation and a feeling of urgency are strongly felt throughout the novel, translated by Elizabeth Clark Wessel, and all in all it’s an exciting read.