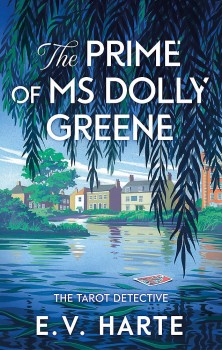 The Prime of Ms Dolly Greene

A missing woman, a body in the river and dangerous dealings next door. Dolly Greene, tarot reader, must use her people skills and sixth sense to make sense of the puzzle.

Dolly Greene is scraping a living reading tarot cards from her little house on an isolated lane in South London. She gets bad vibes while reading the cards for a new client, Nikki: danger and death mixed in with tangled relationships. Dolly stays worried about her client, but her phone number goes straight to voicemail and she never gets called back. When a woman's body is found nearby in the Thames Dolly worries that this could be her former client.

There is also a link to her neighbour Maurice and his son. Dolly has to discover what Maurice is hiding and why the tarot cards are so insistent that Dolly must try to work out the links between Maurice and Nikki and other neighbours It’s clear that danger is looming for Dolly.

Dolly is an interesting character. She has sixth sense insights into the mystery and other characters, but as she is a civilian, the actual investigation is happening at a (far) distance. If it weren’t for one of the attending policemen taking a shine to her, she wouldn't hear anything about the investigation into the death of the woman in the Thames.

That means a lot of what Dolly does is essentially soap opera stuff - local gossip and neighbourly insights. That can work, if the civilian has a real sense of purpose and is able to make real investigative progress. But Dolly doesn't. She has theories, but never seems to develop them in any meaningful way until right at the end when we find out that, of course, things have not been what they seemed at all.

This is the first book in a series and I am interested to see how they develop. As always, series depend on their protagonist and I'm not sure I like Dolly that much. There is a harsh edge to the way she thinks about the other characters, so she either lives in the nastiest neighbourhood possible, or Dolly doesn't actually like people that much – an odd trait in a tarot reader.

There are good parts in this book, but Dolly is going to have to get better at investigating crimes if she wants to have a successful career at it.