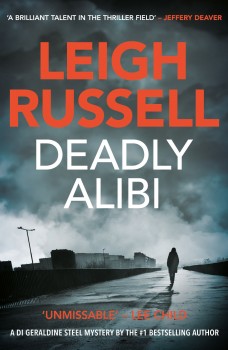 An apparently inoffensive woman is murdered and DI Geraldine Steel’s colleagues all believe that they have found the murderer. Then the person giving him a strong alibi is also found murdered. Geraldine’s instincts tell her that they have got the wrong man.

The book opens with DI Geraldine Steel attending the funeral of her newly-discovered birth mother, Milly Blake. Here, she meets her identical twin sister, Helena Blake, for the first time, and discovers that Helena is an undernourished drug addict. Milly’s last message to Geraldine was to ask her to look after Helena. This is quite a facer for Geraldine, who has lived mostly a solitary adult life, prioritising her work over pretty much everything else. She is understandably nervous about letting Helena into her carefully structured life.

The body of Jamie Coldwell is found in a wheelie bin outside a charity shop, with her skull crushed. Soon, Jamie’s husband Chris is identified as the murderer. DI Steel becomes involved in the investigation which becomes more intriguing when Chris’ lover, Louise Marshall, offers a verbal alibi and is then found murdered, before she can give the police a proper statement.

Chris has opportunity and means, but there is no apparent motive for Jamie’s killing. This, together with the death of Chris’ lover, suggests to Geraldine that Chris is innocent and that there is more to these murders. Her boss DCI Adam Eastwood wants the case wrapped up as soon as possible, so Geraldine must try to find out who the murderer is and collect the evidence to prove it.

I did not get any sense of Geraldine Steel, the person, from reading this book; indeed, many of the characters seemed one-dimensional. The plot is clever enough, though the tension that I expect to find in a thriller was absent. There wasn’t too much police procedural detail either.

For me, the redeeming feature of this book was the developing relationship between Geraldine and Helena and this provides the real story, raising questions as to how far Geraldine will go to protect her sister, and at what personal and professional cost. As a member of the police, she cannot afford to become too deeply embroiled in the world of drugs, but if she doesn’t, what will happen to Helena?