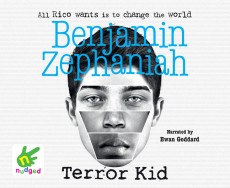 A teenage computer whizz is sucked unwittingly into a dangerous terror plot.

Rico Federico is an ordinary teenager with a passion for computers. He likes building them, programming them and fixing them, and runs a computer repair business from his home in Birmingham. He also has a part-time job in a computer shop on Saturdays. One night, Rico gets caught up in the wave of unrest sweeping across the country in the wake of the shooting of a teenager in London and some clashes with police that have gone viral on the internet.

Caught on the fringe of a riot, Rico sees shops broken into and looted. His friend Karima, who’s been following developments on a social media and always knows where the trouble is going to kick off, throws herself enthusiastically into the middle of the looting. Rico, trying to stay clear of it all, gets picked up by the police and taken to the police station, his protestations that he was not involved going unheeded.

Rico’s worried about how his parents will react to his arrest. They are both Spanish Romany who came to the UK from Spain, well-used to the problems of discrimination, and worked hard to build lives here. Rico is finally released without charge, but to his friend Karima’s disappointment, all Rico wants to do is get back to his computers, rather than getting involved in any direct action.

When someone he doesn’t know asks Rico to build a website as a surprise for one of his workmates at the computer shop, he’s happy to help, especially as the man is willing to pay decent money for his work. The man, who Rico knows only as Speech, then asks him to use his computer hacking skills as part of a peaceful cyber protest against the police. Rico sees that as a way of getting involved without violence, but things turn nasty and he’s sucked into a dangerous plot that will soon see him on the run, accused of carrying out a terrorist attach that leaves several dead. Amidst a nationwide hunt, Rico must learn who he can trust if he has any hope of staying out of the hands of the police.

Terror Kid is a powerful look at how easy it is to end up on the wrong side of a volatile situation, with accusations based on skin colour only, and when prejudice in in play, the facts quickly fly out of the window. Poet Benjamin Zephaniah is a born storyteller who brings Rico, his family and his friend Karima vividly to life, using clear, accessible language to drive home some very hard-hitting points.

Rico’s parents are supportive, behind him all the way, despite the accusations thrown at him by the police, but there’s also a shadow hanging over the family. Rico’s older sister has left home and is no longer speaking to her parents. The reason for this, when it finally comes out, was one of the parts of the story that came as a shock, making the subtle but powerful point that even seemingly progressive people can cling unquestioningly to problematic cultural traditions.

Ewan Goddard’s pitch-perfect narration provides the perfect accompaniment to Rico’s story, at home with both male and female characters in a way that few can achieve with quite such ease. Rico’s frustrations in the early stages come through loud and clear, giving way to fear and exhaustion as the nationwide manhunt takes its toll. Terror Kid takes an uncompromising look at the problems of prejudice in both policing and society and is a timely reminder that skin colour or ethnic background should not be used to determine guilt.