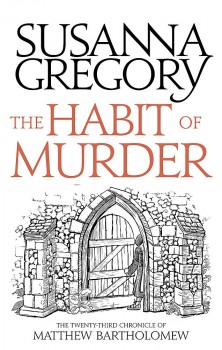 The Habit of Murder

Matthew Bartholomew, Brother Michael and Master Langelee travel to the Suffolk town of Clare for the funeral of the wealthy Elizabeth de Burgh in the hope she has left a legacy to near-bankrupt Michaelhouse college. Several people have met odd deaths and a dangerous situation threatens more killings.

This is the 23rd adventure for medieval sleuths Matthew Bartholomew, Brother Michael and Master Langelee, the mismatched trio from Cambridge University’s impoverished Michaelhouse College – and it’s still as fresh and fiendishly complicated as the first. But former Leeds copper Susanna Gregory this time sets a puzzle with some none-too-veiled hints this may be the end of the triumvirate!

Despite the Treaty of Bretigny, Langelee is returning to his former profession as a soldier, heading for France to help Edward III defend the huge territorial gains the peace has made for English arms. Corpse examiner and lecturer Michael seems to have finally made up his mind to marry the love of his life after an on-off relationship which seems to have gone on as long as the stories. If he does so, he must give up his Fellowship of the College. That leaves Brother Michael, the portly – ‘no, just big-boned and with a healthy appetite’ – ambitious, Senior Proctor. But he will succeed Langelee as Master and continue to scheme and cheat when necessary for Michaelhouse to achieve the prominence he believes it – and he – deserve.

But, there may yet be a Gregory get-out clause! Matthew reckons the mooted changes will take at least a college term and that should allow enough time for at least one more adventure. But if this is to be their swansong, she has ensured they will go out in style.

For a start, she has moved them from the university city to the prosperous Suffolk town of Clare where, as visitors, they know nothing of the local conditions. Her theme of town versus gown switches to town v castle –  hardly an unlikely scenario given an emerging and powerful merchant class and radical new ideas just 20 years before the Peasants’ Revolt was to shake East Anglia and southern England. Finally, like Cecil B DeMille, she introduces the reader to a cast of thousands – largely unpleasant in varying degrees and all apparently capable of murder.

The three friends cross the county border as part of a deputation to the funeral of the wealthy Elizabeth de Burgh, who already supports one Cambridge college, in the hope she has left a legacy to the near-bankrupt Michaelhouse or that they can attract support from other of its well-heeled citizens. They arrive to find the report of her death is false and there have been a series of unexplained deaths amid a growing atmosphere of unrest between the arrogant thrice-widowed Lady de Burgh, the bizarre and violent behaviour of some of her retinue and the local burgesses and church establishment.

When more deaths follow, including that of a fellow traveller of the Michaelhouse contingent, Matthew and Brother Michael feel they are duty bound to identify his killer. Their hunt plunges them into Clare’s murky internal politics, threatens the survival of their beloved college – and puts their own lives at risk.

As always, Gregory pitches her background perfectly, blending historical fact – many of her characters actually existed – with believable skulduggery, twisted plotting, often bawdy humour and complete dead ends. As always, it leads to a spectacular, and in this story, almost a cinematographic, climax.