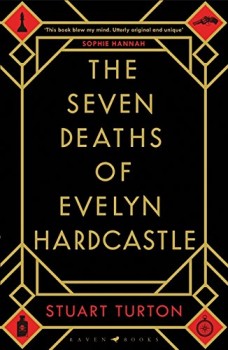 The Seven Deaths of Evelyn Hardcastle

The homecoming daughter of an aristocratic house is shot dead – every night! One of the guests must solve this mystery, but is handicapped as he wakes up in a different body, either guest or staff, each day.

The aristocratic Hardcastle family invite an eclectic selection of guests to a masquerade ball at their isolated and crumbling ancestral pile Blackheath to celebrate the return of their daughter Evelyn from 19 years in Paris. Morbidly the event is also scheduled to commemorate the murder of their son, 19 years before.

One of their guests faces a hideous nightmare. He has been mysteriously warned by an apparition in the guise of a plague doctor that someone will be murdered at the ball, but it will not appear to be a murder – and he will not be able to leave the house until he uncovers the killer.

The apparition adds a warning. Two other guests are pursuing the same mystery, but only the one who solves it will be allowed to leave. To complicate his task, as each day begins, he awakes in the body of a different guest or member of the staff as it becomes increasingly clear someone is determined to prevent him ever escaping Blackheath.

As the celebration/commemoration reaches its climax and fireworks explode, the young and beautiful Evelyn is killed. But she does not die just once. The day repeats itself, over and over, each time ending with a fateful pistol shot.

Stuart Turton’s debut novel is a nightmare Gosforth Park meets Groundhog Day on speed. It’s a psychedelic, mind-blowingly twisty, shocking and fiendish English country house murder mystery with more than a touch of Christie – although even the First Lady of Crime could never have imagined this! The Seven Deaths of Evelyn Hardcastle will both fascinate and horrify, and it’s something you will remember long after you’ve closed the book.

This at times darkly comic, body-hopping, time-travelling, alternative universe, murder mystery, with its cast of fantastically odd characters and situations, finally reaches its climax in a welter of bodies and blood. But even then Turton has one more surprise. It’s bloody brilliant, but you read this at your peril. You’ll never look at a murder mystery in quite the same way again!