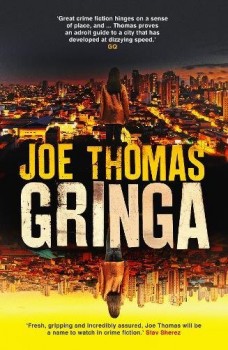 Detective Leme has gringa Ellie under observation – she enters a building but doesn’t come out. When he follows, he finds a man dead and Ellie gone.

Mario Leme is a detective in the Sao Paulo civil police. He comes to know Ellie, a young English journalist keen to develop a career in investigative work, and who has got a whiff of a story, the redevelopment of an inner-city site. At her request, he follows her to an address given by a contact, but on entry finds that Ellie has gone, leaving only her bag, and the body of a young man.

The story is told in chapters from Mario’s and Ellie’s perspective in turn, and moves back and forth in time from the present (2013) to a few months previously. The action takes place immediately before the 2014 World Cup, with the prospect of international attention and an inflow of tourists generating inspiration for money-making schemes by those with their hands on the levers of wealth and power.

One such scheme is being co-ordinated by a legal firm, the redevelopment of ‘Cracklandia’, a rundown area now populated by drug takers and the very poor. Ownership of the land is easy to establish, but the squatters who have erected huts also have rights, and the law firm’s written statements express the intention of compensating residents for relocation. Ellie’s investigations show some odd disappearances, however, and gain a warning from the ‘militar’, the thuggish military police.

Leme knows how things work in Sao Paulo and is trying to find out what is going on before involving Ellie in anything official. He has another reason for keeping quiet too: he observes his girlfriend Antonia, who works for the legal firm, taking possession of Ellie’s laptop and concealing it in her flat. Even worse, some semi-official hacking has revealed that Antonia has been using Mario’s account to disguise payments on the Cracklandia account.

It looks as if both Ellie and Leme have made themselves sufficiently obstructive to the machinations of some major players to make their survival a matter of doubt. Things get very tense as the plot threads are drawn together and the end comes with a twist.

The book starts with ‘Home’, an attempt to capture Sao Paulo in a single page of words and phrases, substantiated within the story itself. The place that comes across is one of extremes: heat, disparity of wealth, fetid waterways, hellish traffic, spicy food, violence, emotional control and wild behaviour. The risks involved in life are portrayed very strongly, particularly if you are not one of the rich enjoying the good life behind guarded gates.

The speech of the participants is thick with vulgar colloquialisms, rendered partially comprehensible by a glossary at the end. The thoughts and conversations of the featured characters come across as roughly-hewn and realistic, although the local argot does sometimes make it difficult to keep up. The whole builds up to a picture of a place you can believe, but you might not necessarily want to visit.