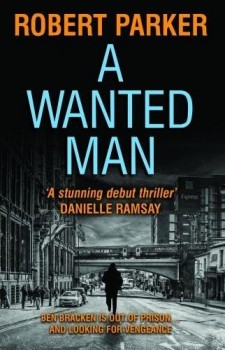 Ex-soldier Ben Bracken is out of prison, but not through the normal channels. He’s a man on a mission, and the mission is revenge. But the murder of an old friend’s father derails his plans.

Ex-soldier Ben Bracken has just got out of Strangeways, Manchester’s notorious prison, but the only problem is that he’s not anywhere near the end of his sentence. His only chance of staying free is that he’s taken some insurance out – insurance that he hopes will be enough the prevent the prison governor setting the dogs on his trail. But in Ben’s world, there are no absolutes, and his careful plans soon suffer a setback when he contacts an old friend and discovers that Jack Brooker’s father has just been shot in what appears to be a gangland killing.

Ben is no stranger to violence or to gangs, and he’s left prison with a definite agenda, one that doesn’t mean staying on the right side of the law. Ben wants vengeance on the London villain responsible for him ending up in Strangeways in the first place, and he’s determined to take his old enemy down, so getting involved in someone else’s quest for vengeance isn’t what he wants to do. But Ben is also unwilling to let a friend down and agrees to commit a small amount of time to helping Jack discover the truth about his father’s death.

A Wanted Man takes a trip deep into the dark heart of Manchester, and shows the side that adverts for the city tend to leave out. The glitzy, cosmopolitan Salford Quays, home to Media City, the Lowry Centre, a large outlet centre and numerous restaurants, also houses Felix Davison, a rich, ruthless crime boss who heads the berg, one of Manchester’s foremost gangs. They’re into drugs, arms deals, trafficking and anything else they can make money from. The local police look the other way, either paid off or frightened off.

Jack’s father Royston had connections with the berg, and they appear willing to help in the search for his killer, but Ben is suspicious of them and their motives, but to get to the truth, he’s prepared to sup with the devil.

Robert Parker (not to be confused with Robert B Parker of Spenser fame) is sparing with his back story on Ben Bracken, at times almost too sparing, but he scores quite highly on the show not tell scale. Ben’s life is dangerous because people try to kill him, but it’s not until much later in the book that it becomes clear why he left the army in disgrace. Ben is tough, resourceful and intelligent, and the plot moves on at a very respectable clip, pushed along by being written in the immediacy of the present tense and narrated by Ben himself.

Where A Wanted Man falls down is on some distinctly leaden prose that wouldn’t survive the test of being read aloud. Ben asks too many rhetorical questions of his audience and there were times when I itched to take a red pen to some clumsy phrases and clunky dialogue. The villains were pretty much out of central casting, despite their apparent affability, and there were no real surprises where they were concerned. There were also some aspects of the plot that made me raise a sceptical eyebrow, too, including the impossibility of keeping tropical fish alive in small, unheated cubes in a safe! But for all that, Parker has scored by producing a page-turner that kept me on board to see how it all worked out, as Ben Bracken goes up against the berg, determined to take them down.