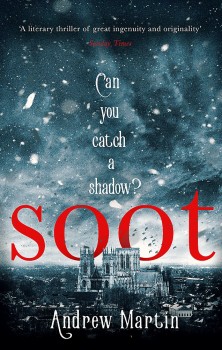 Fletcher Rigge, languishing in a debtor’s prison, receives a bizarre proposition. Find the killer of a prominent silhouette artist in one month and have his debts paid off, or return to jail possibly for the rest of his life.

It’s not often that a new book fails to draw some form of reaction from me. But Andrew Martin’s latest has me completely stumped! A confusing and inconclusive story is told in extracts from diaries, letters and newspapers. While this device to heighten the mystery is hardly new, it makes keeping abreast of the narrative the literary equivalent of a 10,000-piece jigsaw.

Fletcher Rigge, an impoverished young gentleman with literary ambitions, is languishing in York’s debtor’s prison, the result of his father’s mania for gambling which has cost the family estate, his own life, and has been exacerbated by Rigge’s own overdeveloped and antiquated sense of honour. He is temporarily rescued when a bizarre letter arrives containing a proposition from the son of a murdered silhouette artist – the latest trend in portraiture in late-Georgian society – found stabbed to death with his own scissors.

Its author arranges for Rigge to be released for one month, during which time he must uncover the killer. If he fails, he will go back to jail, possibly for life, as he has no independent means of discharging his debts. All he has to go on are copies of the last six distinctive silhouettes the artist created, six people who, it soon becomes clear, must be the prime suspects. Rigge must discover their identities and track them down. With his future at stake, he enters a world of shades as he begins his search across the snow-covered city.

Martin’s dialogue is northern in vernacular and in that almost fatalistic saturninity which so symbolises Yorkshire. Amid the smoke of cigars and the smell of port, the cast vie for sheer oddity or outright unpleasantness, and nothing and no one turns out to be as clearly cut black and white as their silhouettes.

There is social comment too, mostly surrounding the changing face of rural society facing the growing practise of enclosures, and even a doomed love interest for the protagonist Rigge, a man who seems determined to act against his own best interests.

While the supporting characters are interesting, never two-dimensional, and in some cases developed in depth, it is Rigge himself who fails to convince. His personality is slowly revealed through other’s opinions and his own diary entries, which show a somewhat naive, but basically kind-hearted member of the landowning class who, beneath a dandified surface, is clearly a mess of doubts and contradictions.

As a result, the story never really seems to get going for long enough to maintain interest in his problems and the momentum slackens in the second half. There are also too many coincidences with Rigge almost tripping over potential suspects.

It’s all a bit of a let-down compared with some of Martin’s earlier work which includes The Bobby Dazzlers, a comic novel set in the north, which won him the Spectator Young Writer of the Year award or his series featuring Jim Stringer, an Edwardian railwayman assigned to the north eastern railway police.

This beautifully presented novel may be billed as a literary thriller, but I found it too literary, with too many frankly pretentious positions and a distinct shortage of thrills!