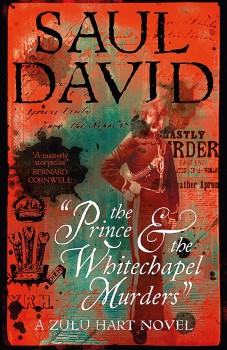 The Prince and the Whitechapel Murders

Jack the Ripper is murdering and mutilating prostitutes. Zulu Hart is called back to England by the Duke of Cambridge, his natural father, to investigate evidence which seems to point to Prince Edward as the killer.

It’s taken eight years for Major George ‘Zulu’ Hart, the mixed-race illegitimate son of a Dublin actress and the Duke of Cambridge, commander-in-chief of the British army, to return to our bookshelves.

Hart, a hero of the wars in Africa and Afghanistan, is a holder of the Victoria Cross, and respected throughout society. He’s also a none-too successful gambler – and in no position to turn down a lucrative job as ‘minder’ to Prince Albert Victor, second in line to the throne, when it is offered by his natural father.

The Duke and the royal family are worried by the charming but feckless young Prince Eddie’s choice of friends – a group of notoriously misogynistic homosexuals – and the fact that he is also a target for the Irish nationalist assassins of Sinn Fein.

With the whole concept of royalty coming under social pressure from the appalling poverty of the East End, the prince lays the family open to scandal and blackmail with his late night excursions with his friends to sample the illegal pleasures on offer there.

When a series of horrible murders rocks Whitechapel – some on nights when the Prince has been there – George is drawn into an investigation which forces him to confront the unthinkable.

Before you think, not another Jack the Ripper re-run, think again about the author of this brilliant and immaculately researched standalone – a novel full of suspense which offers a new and fascinating twist to the story.

Saul David is one of the best of modern historians – his non-fiction work has centred on the Army and varies from the Indian Mutiny to Churchill’s sacrifice of the Highland Division which made the Dunkirk evacuations possible – who has discovered through Hart, a proper boy’s own hero, a real talent for story-telling.

This entertaining story which takes the reader deep into the seamy side of Victorian London features almost entirely real figures from the period. All are endowed with motives, intent and dialogue that may be entirely fictitious, but which are nevertheless convincing and the twisted plot moves along at almost breakneck pace.

Hart joins forces with CID Sergeant Fletcher in a covert investigation as it appears the police are choosing not to follow certain leads and looking for an easy conclusion to what is becoming a cause celebre.

There has been almost endless speculation on this particularly nasty period of Victorian history and it has not diminished over time. David adds his own theories, as well-reasoned and believable as any others, to what is a compelling narrative and which provides an entertaining historical read with plenty of suspense and tension.