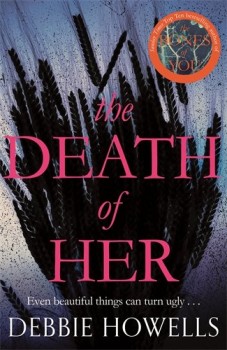 The Death of Her

A woman is attacked and left for dead in a field in Cornwall. She has no idea who she is, but she knows her young daughter is missing.

Charlotte Harrison lives in a remote house on the Cornish coast with her surfer boyfriend, Rick. Their relationship is an odd one. They seem to lead mostly separate lives, with Rick spending most of his time surfing and hanging out in a surfers’ bar, while Charlotte doesn’t seem to do an awful lot. There are heavy hints of a tragic backstory but in the early stages of the book there’s little to go on.

When a woman is attacked and left for dead in a field of maize, Charlotte sees an appeal on the local police’s Facebook page for information about the woman’s identity, as she has lost her memory. The woman is calling herself Evie, but Charlotte knows her as Jen Russell. Charlotte rouses herself from what seems to be a fairly habitual state of lethargy and phones the police to volunteer the information that she was at school with the mystery woman. DI Abbie Rose is keen to have Charlotte’s help, in the hope that meeting someone who knows her might help bring back her memory.

I picked up this book in the hope of it being a decent police procedural, but instead found myself dropped into the usual psychological thriller recipe that seems to go along the lines of ‘take a missing kid, throw into the mix another missing sprog from a decade or so ago, stir well and season with a heavy dose of unreliable narrator.’ You’d think by now this area of the genre would have reached saturation point with missing kids, but apparently not.

Charlotte is a difficult narrator to love. She’s self-absorbed to the point of obsession and only seems to want to get involved when it suits her. The attack victim – Evie or Jen, take your pick – is convinced that her own child has been abducted, but no one ever remembers seeing her with a child, and there are no traces of one in her house, not even on a forensic examination. The police take her claims seriously at first, and DI Rose even spends several nights in the house with the woman when she’s discharged from hospital.

Just as I was settling into Charlotte’s narration, there’s an abrupt shift to a third person narrative from the point of view of DCI Jack Bentley, recently returned to work after compassionate leave following the death of his son in a car accident. I finally got a whiff of the police procedural I’d been looking for, but I did roll my eyes at the crime fiction cliché of a copper with a troubled past called Jack!

There are also occasional chapters from the point of view of someone called Casey, presented in a different typeface, all date-stamped, which progress through time. I must admit I find this sort of device borderline irritating at best, and downright annoying at worst, as it makes me feel I have to spend time figuring out the relevance, when all I want to do is just settle into one narrative and get on with the book.

The Death of Her peddled rather too many clichés for my liking. There are only so many missing kids and suffering coppers that I can take, and the oblique hints at background nastiness from local Satanists didn’t succeed in creating atmosphere, even with the seemingly obligatory killing of domestic animals thrown in to darken things. I suspect that this sort of psychological thriller just isn’t my bag and is a classic case of your mileage might vary. There was certainly enough to intrigue and keep me on board to the end, so to that extent, the book succeeded.