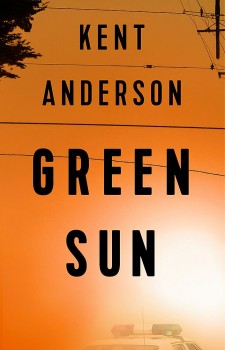 Hanson is new to the Oakland Police, but set apart by age, a stint as a policeman in Portland, service in Vietnam and a master’s degree in English literature.

The returning soldier is now a frequent icon in US crime stories, the combination of military skills and mental trauma providing a great foundation for drama. So often, however, the product is a comic-book character with an egregious appetite for violence and mayhem visited on suitably evil foes.

Kent Anderson’s Hanson is something more interesting. A 38-year-old veteran of Vietnam, he is trained for combat, haunted by memories of his service, and finds alcohol necessary to get to sleep. But in his interaction with the people of Oakland as a police officer he is not aggressive. He uses his awareness of danger as a stimulus for an inventive approach to challenges on the street, seeking to defuse problems rather than compounding them with belligerence.

His approach is unusual enough to make some of his colleagues, and particularly his superiors, regard him with suspicion. As an officer patrolling alone in some of the most dangerous areas of the city he is already at risk, and is placed in greater danger by those in the hierarchy who despise his attitude and are happy to set him up. Hanson is luckily wary and quick on the uptake, and is aided by his natural empathy with the disadvantaged, accompanied by a rooted belief that he is invulnerable.

The author, who has some experience of the Oakland PD, makes clear the pressures faced by the cop on the street, working alone in foul-smelling patrol cars with inadequate back-up and always under demands to fill arrest quotas. Morale is poor with frequent absenteeism, which merely compounds the problem. In such circumstances it is often safer to shoot first and ask questions later – after all, no OPD officer has ever faced serious sanction for shooting a civilian. Those who doubt whether this represents a realistic picture may be interested to read of the real-life travails of Stephen Mader, a West Virginia PO recently fired for not shooting a man who he was convinced was not a threat.

Hanson’s intention is to complete his first 18 months with the OPD, after which he can apply for a job away from the horrors of the city, where he can indulge his interest in wildlife. He forms a relationship with a woman who he would like to take with him. But in the meantime he has to face up to the daily grind of sorting out the messed up lives of those in the inner city, while fending off a gang claiming to be Islamic representatives of the people and enjoying the support of local government.

Hanson certainly makes an engaging protagonist, with a readiness to engage with the wide variety of people he meets, sympathetic to those in need but fast and tough when he needs to be. His path also lays bare the challenges of American inner cities, and the way in which law enforcement has developed in response.