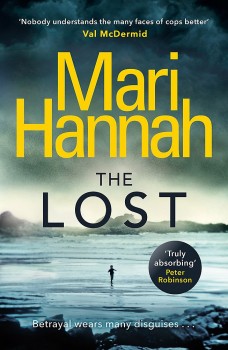 A ten-year-old boy goes missing and there are discrepancies in his stepfather’s version of events. DI David Stone and DS Frankie Oliver know that the first 24 hours in any investigation of this type are vital and the pressure soon mounts.

Alex Parker is on her way back from a spur of the moment holiday with her sister. She feels guilty for having left her ten-year-son Daniel behind, but she knows he’s been safe. Her husband Tim, Daniel’s stepfather, loves the boy like his own son. But Daniel isn’t safe, he’s missing. A mix-up between Tim and the au pair about who was collecting Daniel after football practice led to the boy getting into a strange car and disappearing.

For DI David Stone, who’s moved to Northumberland from the Met, and his DS, Frances – Frankie – Oliver, several things don’t ring true about Tim Parker’s story. Justine, the au pair, claimed Tim sent her a text message to say he was collecting Daniel, but he denies sending it, and there is no record of the sent message on his phone. There are also discrepancies in the timing of Tim’s version of events. Despite Stone’s initial reluctance to investigate, Frankie convinces him that they should follow up and that Daniel isn’t just going to come home after a few hours. Stone agrees, but his strange behaviour around Alex Parker makes Frankie wonder if the two have some history she doesn’t know about.

Mari Hannah has switched publishers, apparently leaving behind her usual series character DCI Kate Daniels in favour of a new duo, but I’m pleased to say that the books are still firmly rooted in Northumberland, although the landscape doesn’t feature as much as it did in some of her earlier books.

Also good news is that the partnership of Stone and Frankie Oliver has a lot to recommend it. He’s taken a drop in rank with the move north, to live in his gran’s old house and to be closer to his brother. She’s a third-generation copper and has a lot to live up to. The two form a close working relationship, but it’s not close enough for Stone to open up about what it is in his past that freaks him out whenever he’s close to Alex Parker. As backstories go, this one doesn’t weight the plot down too much, although there were times when I thought it was somewhat unnecessary and was just there because no self-respecting police officer in crime fiction can appear without a supporting cast of baggage.

By contrast, Frankie Oliver comes over as refreshingly free of problems, and although there are some inevitable hints of a shadow in her past, it’s not something that defines her as a character. She’s perceptive, tenacious and not afraid to call her boss on it when he’s behaving like a complete idiot. I liked both of them a lot. The plotting was sound, which is always a bonus, but the story was mainly character driven, and the characters are strong enough to carry it off. The Lost stands up very well as the start of a new series as well as being an excellent page-turner in its own right.