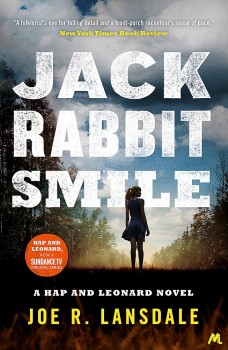 Hap and Leonard take a job from a pair of religious racists to find their daughter Jackrabbit, who they haven’t seen for five years.

This is the 11th outing for the East Texas crime-fighting pair of Hap, a self-proclaimed white trash rebel, and Leonard, a black, gay republican ex-Vietnam veteran. As the book opens Hap is enjoying a backyard barbeque to celebrate his marriage to Brett, who organises things and keeps the boys on track. Festivities are interrupted, however, with the arrival of a couple, Judith and Thomas, looking for help finding Judith’s daughter Jackrabbit.

Judith and Thomas advertise their belief that ‘whites are right’ so Thomas and Leonard immediately begin posturing; luckily, Brett is able to forestall fisticuffs, and Hap and Leonard take the job notwithstanding the obnoxious and ignorant nature of their clients. The pair take off for Marvel Creek where Jackrabbit’s family live. It was also the place where Hap was brought up, but the town has changed in the last 20 years.

First stop is a church once run by Jackrabbit’s father, who they learn is dead by his own design, and in a very weird way. Jackrabbit, it turns out, has had a succession of boyfriends, although none of them admit to knowing what has become of her. The duo meet ‘Professor’, a man who advocates separation of blacks and whites and seems to have several residents of Marvel Creek under a financial obligation to him, as well as control of some tough characters determined to run Hap and Leonard out of town.

As Hap and Leonard fans will know, however, our protagonists are not easily intimidated and after soberly considering their options, return to Marvel Creek to visit mayhem on the bad guys. Fortunately, they have the support of law enforcement in both Marvel Creek and back home, in the form of Leonard’s boyfriend Pookie. The outcome is never in doubt, albeit with a surprise in the tail as far as Jackrabbit is concerned.

The sheer number of Hap and Leonard books and the TV series which followed shows that there is an audience for these stories, explained by a cute ‘down home’ dialogue, clearly identifiable good and bad guys, and problems which can be entirely resolved with a positive attitude, fists and the use of weaponry. They take the trouble to rescue a mistreated guard-dog, and are ever ready to champion the interests of the downtrodden.

On the other hand, some will find the slick exchange of witticisms close to the lowest form of humour, and the characters mainly patsies for denigration and disposal by Hap and Leonard. It is difficult to find such a pervasive use of violence anything other than deplorable, even if it is the good guys who come out on top, and this does clash with the atmosphere of rollicking good fun.