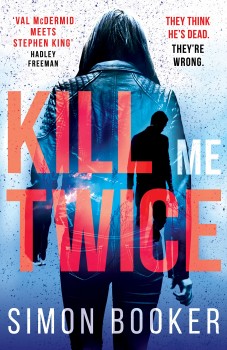 Investigative freelance writer Morgan Vane takes up the case of a woman jailed for the arson murder of the abusive father of her child – then sees the ‘dead’ man outside her own home.

This leftie soap opera will have the Guardianistas tutting into their kir or proseccos as they relax by the pool in their holiday villas in Provence or Tuscany. Simon Booker is an author, screenwriter, TV and radio producer, whose credits include ITV’s The Stepfather, BBC adaptations such as Just William, and work on series such as The Inspector Lynley Mysteries, Holby City and The Mrs Bradley Mysteries, plus romantic comedies for American TV.

He says he often discusses murder methods over breakfast with his partner, fellow crime writer Melanie McGrath, at one of their homes in London or Deal.

Perhaps they should be discussing the reality of crime, for this, the second in a series of psychological thrillers featuring Morgan Vine, single mum and freelance journalist who specialises in miscarriages of justice, is little more than a collection of fashionable clichés. The abused child who matures into a vicious, murderous sociopath; the ‘tiger’ single mum, determined to defend her worthless daughter at any cost, including truth; the girl herself, 20-years-old, going on ten, repeating all her mother’s mistakes and worse; the insensitive police, accepting the obvious and unwilling to admit errors unless forced; the rigid and uncaring prison system.

Chuck in coercion, corruption, drug smuggling, baby-trafficking, torture and voyeurism and you’ve got a dark, fast-moving plot that makes even the completely unbelievable, but socially aware and politically correct EastEnders pale into insignificance.

Morgan’s book on famous miscarriages of justice – all the usual choices, the Guildford Four, the Birmingham Six, Evans, Bentley – has become a surprise bestseller, enabling her to continue her unlikely life in a converted railway carriage on the wild and deserted Kent foreshore at Dungeness. It has also made her the only hope of most of the country’s 85,000-plus prison population, all, of course, innocent! But from a flood of letters, one stands out. Anjelica Fry, convicted of the arson murder of her abusive, drug dealer boyfriend and father of her child, touches a chord.

When Morgan discovers that Anjelica, an inmate in the mother and baby wing at HMP Dungeness, just minutes from her home, is a pyrophobe – literally terrified of fire – she wonders how the police and the forensic experts who identified the charred body could have been so mistaken. Then the ‘dead man’ turns up, outside her own home!

An impossible, often almost gut-churning, plot leads to an unexpected, and equally impossible ending. This was a good concept. The isolation and eeriness of the windswept Kent coastal setting is perfect for a gritty story of madness, torture and death. But the complexity of the story, the disbelief factor and the cardboard, stereotypical nature of the characters make it a huge disappointment.

Morgan Vane is a caricature of a devoted mother and completely reckless adult. Her daughter Lissa – much of the story relates to her childish behaviour and its consequences – is one of the most annoying characters you will ever meet. There is far too much about Morgan’s abysmal love life and Lissa’s dramatics.

The emphasis is taken away from the most interesting character, the man who convinced the world he was dead. Instead this manipulative, truly evil psychopath, whose hero is the Colombian drugs baron and narco-terrorist Pablo Escobar and who is capable of the most cunning deceptions and brutal behaviour, is presented as almost a ‘victim’ himself. Morgan eventually uncovers the truth to correct the mistakes of the authorities, but at what personal cost is yet to be determined as the series will unfortunately go on.

Booker admits he hopes one day to see her adventures on the screen. That is probably the right place for them – a six-part ‘drama’ presented with all the hype television is capable of for a totally uncritical audience!