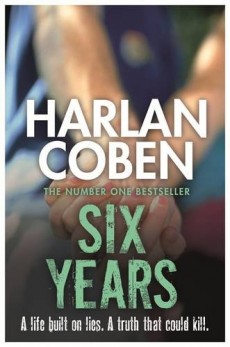 Six years ago, Natalie, the love of Jake Fisher’s life, dumped him and married another man. At her wedding, Jake promised to stay away from her, but six years later when he discovers that her husband has died, he finds that promise becomes harder and harder to keep.

Harlan Coben, famed for his Myron Bolitar novels, is equally well-known for his standalones, returning often to the theme of something deeper lurking beneath an apparently domestic setting, and in that respect Six Years runs very much true to form. But that doesn’t really matter, as when Coben is on form, as he is here, the books progress at such a pace that you’re yanked along for the ride and similarities to earlier books don’t matter quite as much as they might do in the cold, and rather more critical, light of day.

This is one of the few times where a prologue seems justified, and here we see Natalie, once the love of Jake Fisher’s life, marrying another man. He’d thought they were happy together, but then out of the blue she dropped the bombshell that she was leaving him and marrying an old flame. Jake can’t stop himself going along to the wedding, still convinced that Natalie must feel something for him, but instead, she extracts a promise from him that he’ll leave her and her husband alone. Unwillingly, Jake gives the promise and, true to his word, he walks away from them and their lives.

Them six years later, Jake comes across an obituary of the man Natalie married and, in the same way as he couldn’t keep away from their wedding, he can’t keep away from Todd’s funeral, either. But at the funeral, things aren’t at all what Jake expected. For one thing, Todd’s widow isn’t Natalie and that’s when everything Jake had believed true about their time together starts to unravel.

The stock in trade of so many thriller writers is that of ordinary people in extraordinary circumstances and it’s when he’s treading this relatively well-worn path that Coben is at is best. Jake Fisher is a college lecture who conforms well to the bookish, tweed jacket-wearing stereotype, but he’s also done time in his youth as a nightclub bouncer and does at least have some idea of how to handle himself in a fight. Fortunate, really, as he does get into quite a lot of scrapes. Every time he overturns a stone in Natalie’s past, something nasty seems to crawl out from underneath it and the plot becomes ever more convoluted, but Coben keeps a firm rein on events and confusion rarely ensues, although he doesn’t do a particularly good job of continuity when it comes to Jake’s mobile phones. But that’s a minor – albeit occasionally intrusive – quibble, as our hero scarcely has time to draw breath, let alone keep reprogramming contact numbers as one phone after another bites the dust.

Lie after lie is uncovered and at times Jake seems to be getting further away from the truth rather coming closer to it. Occasionally seeming older than his years, Jake remains an engaging main character, and his resourcefulness never entirely stretches the boundaries of credibility. Although the ending is a trifle sugar-coated that doesn’t detract too much from a competent and tense tale of subterfuge.