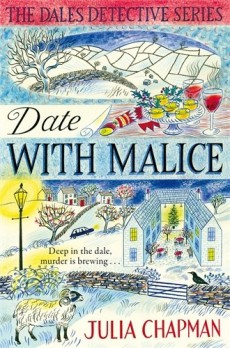 When elderly Alice Shepherd tries to convince detective Samson O’Brien someone is trying to kill her, he dismisses her fears as the ramblings of a confused old lady. Then a series of incidents at her retirement home launches him into a complex investigation.

Any story set in the isolated, insular, suspicious and gossipy communities of the Yorkshire Dales could be called a cosy and this second novel in what is proving to be a charming Dales Detective series, is just that, although a cosy with attitude might be a better description.

Julia Chapman, known as Julia Stagg for her fine Fogas Chronicles of the French Pyrenees, really gets to grips with the part of the Pennine Way where she now lives. She has the distinctive and often harsh landscape and way of life, the ‘brussen’ – the aggressive stubbornness for those from south of Skipton  – and the warm-hearted elements of the Dales folk down to an absolute T.

It’s so authentic you expect former Yorkshire and England cricket captain Geoffrey Boycott to stride out of the mist talking about the ‘corrie-dawer of uncertainty’. It may not be ‘owt-side off-stoomp’, but that corridor is something Chapman exploits with Yorkshire charm and wit, using the potential victims to build up the tension in what is a well-written and well-plotted story.

When elderly Alice Shepherd arrives at the Dales Detective Agency on a December morning, convinced someone is trying to kill her, Samson O’Brien dismisses her fears as the ramblings of a confused elderly lady. Alice is found dead shortly after and following a series of incidents at the retirement home where she was a resident, he begins to wonder if there could actually be something to her claims.

As the Dales village of Bruncliffe prepares for Christmas in typical cold and rain, Samson is thrown into a complex investigation which will require the former black sheep of the village to regain the trust of the community he turned his back on years before to opt for a life as an undercover Met policeman.

He, largely involuntarily, enlists the help of the local girl who followed him around when she was much younger – the tempestuous landlady of his office premises, Delilah Metcalfe, who is wilful, outspoken, and as free with her fists as her mouth. Samson and Delilah must work together if they are to uncover the threat to the elderly residents of Bruncliffe – and in a separate investigation solve the case of an apparently kidnapped breeding ram!

It is Chapman’s cast and their relationships to each other which lifts this story out of the ordinary. From a tight-fisted sheep farmer to the close-knit community of the old folks complex, these are all very real people, talking and behaving exactly as you would expect them to. The main protagonists are just as believable. Samson, suspended from his police job, and trying to make ends meet while rebuilding his relationship with his reformed alcoholic father and Delilah, wary while getting over an impulsive – and bad – marriage, worried over her dating business and whether she will lose her faithful dog, are as ordinary a couple of detectives as you could meet.

Inevitably they are attracted to each other. Inevitably both try to ignore it. Watch this space as Chapman lays the groundwork for their future adventures – certain to involve some danger as a dark secret from Samson’s past and the reason he had to quit London threatens to catch up with him.

As village murder mysteries go, this clever, witty and realistic series is quite out of the ordinary and strongly recommended to anyone who wants a genuine, but not too cosy, cosy, as if you could even think of that on the Yorkshire fells!