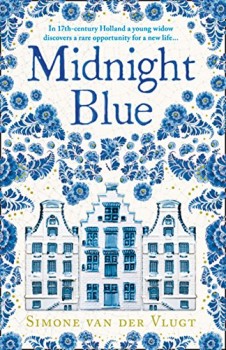 A young widow leaves her home in the Dutch polders for a life in Amsterdam. But she must move on when the past threatens to catch up with her.

Dutch author Simone van der Vlugt, who has written a series of young adult novels, then moved into the historical genre with four stories set in her native Netherlands. This is the first to be translated into English, a task sympathetically and brilliantly handled by Jenny Watson, who maintains both the pace and the dramatic intensity of the story.

Catrin, aged 25, has just been widowed by the sudden death of her drunken and abusive husband. She leaves her village outside Alkmaar when the dead man’s brother, jealous that his sibling’s farm has passed to her, starts to spread rumours about the cause of his death. She is unable to stay in the stifling small village where everyone knows everyone else’s business and gossip is rife, and flees to Amsterdam where she takes a job as housekeeper to the successful Van Nulandt merchant family.

The Amsterdam of 1654 is a city reaching the peak of its powers. Dutch ships bring back exotic riches from the Far East and its influence spreads throughout the area. Science and the arts are flourishing with Rembrandt van Rijn ushering in the Golden Age of the Dutch masters and his pupils like Nicholas Maes following in his footsteps. Others, like the inn-keeper Johannes Vermeer, await their chance at international immortality.

Catrin has always had an artistic streak, which until now was decorating simple household objects like chairs or cupboards with basic paints. When her bored mistress takes art lessons, Catrin absorbs the information and techniques and longs to use her own artistic talents.

When a figure from the past threatens her new life, the family arrange for her to move to Delft, where her talent earns her a chance as a painter in a pottery run by the merchant’s brother. But Dutch pottery is heavy and practical. The rage among the rich is the coveted Chinese porcelain brought to Holland in the Dutch East Indies company’s ships.

With Catrin’s eye for line and the technical skills of its owner in firing and glazing, slowly the workshop begins to develop a new type of pottery and Delft Blue – still as prized today as when first created – is born.

Just when her life seems to be settled, tragedy strikes. The plague and the explosion of the enormous armoury almost destroys the town. In the wake of the twin disasters, her past nemesis reappears, this time seeking more than blackmail.

Catrin is a determined young woman with an all-too obvious secret. But she is an intensely real character, riding her luck, but prepared to start again when circumstances dictate. If she has a fault, it is her impulsiveness that leads to a number of unwise decisions. Some may accuse her of a manipulative nature, but this is a girl set on casting off a sad past and making something of her abilities in an age and society where women were expected to play very much the role of home maker.

From the beautiful cover, which reflects the emergence of Delft Blue, through a story that contains enough mystery, death and romance to satisfy all tastes, van der Vlugt displays complete mastery of her subject, bringing 17th century Holland to life.